Why did JAMA Oncology publish a paper written by a Telecom industry spokesperson?

JAMA Oncology recently published a paper, "Radiofrequency Radiation and Cancer: A Review,” that provides a biased, highly selective review of the scientific literature written by David Grimes, a pro-industry science writer and physicist:

Importance: Concerns over radiofrequency radiation (RFR) and carcinogenesis have long existed, and the advent of 5G mobile technology has seen a deluge of claims asserting that the new standard and RFR in general may be carcinogenic. For clinicians and researchers in the field, it is critical to address patient concerns on the topic and to be familiar with the existent evidence base.

Observations: This review considers potential biophysical mechanisms of cancer induction, elucidating mechanisms of electromagnetically induced DNA damage and placing RFR in appropriate context on the electromagnetic spectrum. The existent epidemiological evidence in humans and laboratory animals to date on the topic is also reviewed and discussed.

Conclusions and relevance: The evidence from these combined strands strongly indicates that claims of an RFR-cancer link are not supported by the current evidence base. Much of the research to date, however, has been undermined by methodological shortcomings, and there is a need for higher-quality future research endeavors. Finally, the role of fringe science and unsubstantiated claims in patient and public perception on this topic is highly relevant and must be carefully considered.

Several experts who have worked in this field for decades and two former U.S. government health officials wrote to me expressing their concerns about this paper:

On December 20, 2021, I sent the journal’s editor-in-chief, Mary “Nora” Disis, MD, my comments along with a recommendation that the journal retract the paper. Her response:

“The JAMA Network journals reserve retractions for articles that have been fabricated, falsified, or plagiarized. There does not appear to be evidence of such misconduct in this article.”

She suggested I submit a (400-word) letter to the editor so the paper’s author could respond to my comments (with a 500-word letter). In my professional opinion, letters to the editor would not suffice to undo the potential damage caused by publication of this industry propaganda piece in a journal sponsored by the American Medical Association.

Since the journal refused to retract the paper despite what I suspect was a flawed peer-review process, the journal should change the paper’s title to accurately reflect its contents (e.g., “Radiofrequency radiation and cancer: Telecom industry talking points”). Moreover, the journal should publish a companion piece written by experts independent of the industry so the journal’s readers are not misled by an article replete with industry sound bites.

My critique of the Grimes paper appears below.

Microwave News. David Robert Grimes Is Not Affiliated with University of Oxford. January 19, 2022

A Critique of “Radiofrequency Radiation and Cancer: A Review”

The title of this paper, "Radiofrequency Radiation and Cancer: A Review," is misleading because this is not a literature review. Rather, this is an opinion piece written by David Grimes, a science writer and physicist who has served as a paid spokesperson for the telecommunications industry.

Following is a link to an “informational video” he recorded for Vodafone UK: 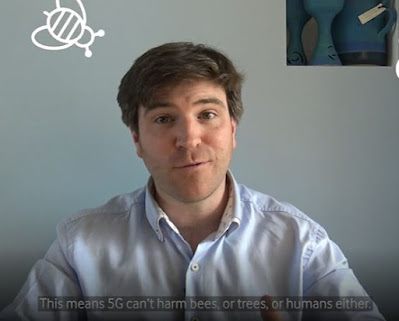 Vodafone UK News Centre. “5G and health: Everything you need to know.” Video (2:23). April 24, 2020. https://newscentre.vodafone.co.uk/5g/5g-and-health-everything-you-need-to-know/
The Grimes paper rehashes arguments I have heard for more than a decade. It reflects the perspective of some physical scientists and engineers since the 1980’s that only ionizing radiation is harmful due to photon energy. Their position is that radiofrequency radiation (RFR), or non-ionizing radiation, is harmless unless its intensity exceeds a certain heating threshold, and the only plausible mechanism for harm from RFR is acute heating. These scientists employ a common industry strategy to manufacture doubt about the science by dismissing thousands of peer-reviewed RFR studies published since the 1980's with the claim that these studies are not methodologically sound or have not been replicated.

Grimes implies that anyone concerned about health effects from 5G or RFR is a conspiracy theorist. 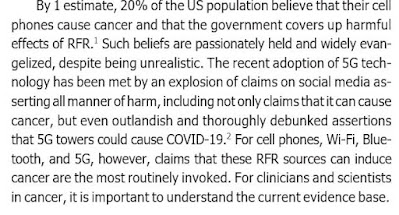 Grimes' paper devotes five paragraphs to the discussion of the “biophysical overview” -- how ionizing radiation can harm living organisms through direct action caused by the energy in photons.

This overview is a "straw man" argument used for decades to dismiss the peer-reviewed research that found adverse biologic and health effects from exposure to non-ionizing electromagnetic fields including radiofrequency radiation (RFR).  Although Grimes acknowledges that much of the damage caused by ionizing radiation is through indirect action which requires much less energy than direct action, he ignores the substantial body of peer-reviewed research that has found non-ionizing radiation including low-intensity RFR can also cause biologic harm and adverse health effects through indirect actions.

Numerous peer-reviewed papers have been published that discuss biophysical mechanisms for adverse RFR effects. Even though the mechanisms are not fully understood, substantial empirical evidence exists that low-intensity RFR can induce oxidative stress, reactive oxygen species (or free radicals), and stress proteins via indirect action.

In contrast to the paper’s claim, 65% (n=78) of 125 published studies of RFR found significant evidence of DNA damage using the comet assay test.

One would not expect a “direct link” or a proportional increase in rates of common brain tumors relative to adoption of cellphones because the latency between exposure to a carcinogen and diagnosis of a solid tumor is often several decades. In the U.S., there have been increases in specific brain tumors in some anatomic locations since cellphones have become popular. Data from the National Cancer Institute’s SEER cancer registry indicates that the incidence of glioblastoma, the most common and serious malignant brain tumor, has increased in recent years while glioma incidence has declined. This suggests that heavy long-term cellphone use promotes tumor growth. A study in the UK obtained similar results.

With the advent of the smartphone about a decade ago, the transmitting antennas in many phones are now located in the bottom, instead of the top, of the phone. Hence, the primary tumor site for those who hold their phones to their ear may now be the thyroid gland instead of the brain. Two Yale University studies found increased thyroid tumor risk with heavy cellphone use. Moreover, the incidence of thyroid cancer has increased substantially in the U.S. and many other countries. Smartphone use may have contributed to this increase. 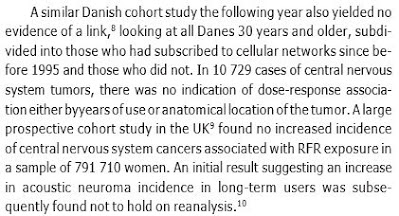 The Danish cohort cellphone study has been widely discredited (see responses to this study). The WHO International Agency for Research on Cancer dismissed this study in its comprehensive report about RFR cancer risk due to the study’s misclassification of many cellphone users as non-users and its lack of individual exposure data.The UK cohort study also suffered from misclassification because exposure data were only collected at baseline and cellphone use likely changed during the course of the study. Thus, neither of these cohort studies provides a reliable assessment of brain tumor risk among cellphone users.

In 2015 I interviewed the "most knowledgeable person" at the U.S. FDA regarding cell phone radiation risks, the head of the FDA Center for Devices and Radiological Health who served as the agency’s representative to the now-defunct federal Radiofrequency Interagency Working Group. He informed me that every cellphone study that found evidence of harm had at least one methodological problem; hence, the FDA dismissed all of these studies. Apparently, little has changed in the ensuing years at the FDA.

As a researcher for more than 30 years in the School of Public Health at the University of California, Berkeley, I have never read a study without “inherent limitations.” That no study is perfect is not a valid reason to exclude many hundreds of peer-reviewed studies which found significant evidence of harm from RFR or cellphone radiation.

The FDA review paper was not subjected to an independent, external peer review process, unlike the NTP cellphone radiation study discussed next.

Research conducted by the National Toxicology Program (NTP) of the U.S. National Institute of Environmental Health Sciences is considered the “gold standard” by most toxicologists. The $30 million NTP cellphone study was one of the largest animal studies ever conducted by the NTP so to criticize it for ”low-power” is ludicrous. Prior to publication of the NTP reports, the study was subjected to extensive peer review and addressed the concerns of the reviewers. The study’s methodology has also been defended in a peer-reviewed paper.

The NTP study found "clear evidence" of increased tumor incidence from long-term exposure to cellphone radiation in male rats and DNA damage from shorter exposures to male and female rats and mice. Two other major randomized, controlled animal studies, the Ramazzini Institute study and a U.S. Air Force study, support the NTP’s finding that long-term exposure to low-intensity (i.e. non-thermal levels of) RFR can cause cancer.

The NTP study has been attacked by pro-industry scientists because it demonstrates the inadequacy of the RF exposure guidelines promoted by the ICNIRP, the IEEE, and the FCC. The ICNIRP is a self-selected group of scientists who believe that non-thermal exposure to non-ionizing radiation including RFR is harmless. Moreover, these pro-industry scientists have co-opted the WHO EMF Project and biased many national health agency reviews of cellphone radiation health risks according to multiple news stories published by Investigate Europe, a multinational group of investigative journalists.

The IEEE or Institute of Electrical and Electronics Engineers is a professional association for engineers. Their committees that established RFR exposure limits were dominated by engineers and physical scientists with little input from biologists or health scientists.

The FCC, the agency in the U.S. that regulates RFR exposure, has no health expertise and relies on the FDA for advice; however, the FDA does no research on RFR health effects. For more than two decades, the FCC has been “captured” by the telecommunications industry according to a Harvard study. Most FCC commissioners have worked for this industry before and after their appointments to the Commission.

The Grimes paper is a prime example of a common industry tactic when a product or technology is harmful to humans or the environment -- manufacture doubt about the state of the science: 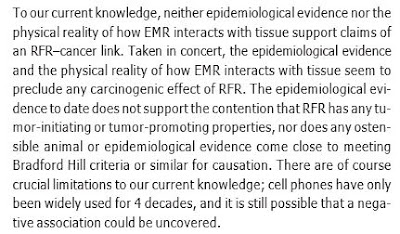 Despite Grimes’ claim, Michael Carlberg and Lennart Hardell applied the Bradford Hill criteria to the peer-reviewed data and concluded that long-term exposure to cell phone radiation is a causal factor for tumor risk. Hardell and his colleagues in Sweden were not the only researchers to conduct case-control studies which found increased brain tumor risk with heavy cellphone use. See also the 13-nation Interphone study and a French study.

Our 2020 review and meta-analysis of the case-control tumor risk studies (Choi, Moskowitz et al., 2020) went through extensive peer review prior to publication. Moreover, post-publication we defended the paper against every criticism raised in two letters to the editor submitted by ICNIRP scientists and their associates. Our quantitative review of 46 case-control studies “found significant evidence linking cellular phone use to increased tumor risk, especially among cell phone users with cumulative cell phone use of 1000 or more hours in their lifetime (which corresponds to about 17 min per day over 10 years), and especially among studies that employed high quality methods.”

Although more is to be learned regarding mechanisms, there are plausible biophysical mechanisms for carcinogenesis due to RFR exposure. In contrast to the Grimes’ paper, for an evidence-based perspective on the state of the science see a paper published in 2018 in the journal Environmental Pollution by Dominique Belpomme and colleagues, “Thermal and non-thermal health effects of low intensity non-ionizing radiation: An international perspective.”

More than 240 EMF scientists, all of whom have published peer-reviewed papers on electromagnetic fields (EMF) and biology or health totaling more than 2,000 papers and letters in professional journals have endorsed the International EMF Scientist Appeal: 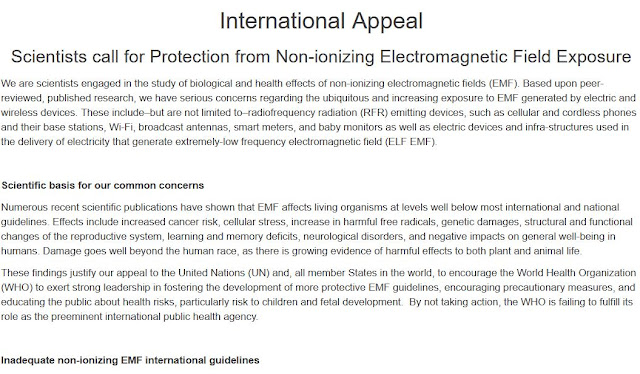