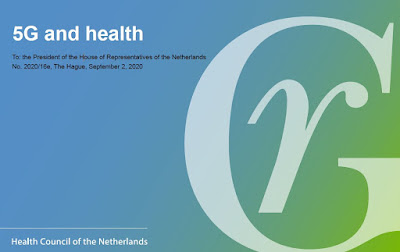 "Executive Summary
The latest standard for mobile telecommunications (5G) is faster and more reliable and can process more data at the same time. 5G was developed to cope with the increasing demand for mobile telecommunications and to make new applications possible such as self-driving cars and remote surgery. The advent of 5G networks is, however, resulting in societal concerns about the potential influence of 5G on health. That is why the House of Representatives of the Dutch parliament has asked the Health Council of the Netherlands to analyse what is known about this from a scientific perspective. The Council’s Standing Committee on Electromagnetic Fields has looked into this issue.
Effects of 5G frequencies on health not yet fully examined
To a certain extent, 5G uses the same frequencies as previous generations of mobile telecommunication such as 3G and 4G. In addition, it will use new frequency bands. The rollout of 5G networks has only just begun. Therefore, there are no studies as yet into the health effects of (long-term) exposure to electromagnetic fields with the frequencies that are reserved for 5G. However, applications have been examined that use frequencies very close to the new 5G frequencies. These include 2G, 3G and 4G, as well as Wi-Fi and radar.
No actual health risks known
This report is a first step in the analysis of possible health effects of 5G frequencies. As yet, the committee is unable to answer the question of whether exposure to 5G frequencies actually poses risks to human health. There are two reasons for that. The first is that such a statement requires knowledge of the level of exposure that can cause health damage to humans. That requires a more detailed analysis of the scientific data than the committee was able to carry out. The World Health Organization (WHO) is currently performing such an analysis and it is anticipated that it will be completed in 2022. Secondly, it requires knowledge of what the actual exposure to radiofrequency electromagnetic fields will be after the introduction of 5G. That is not yet known, because the use of 5G, as stated earlier, has only partially started.
Relations between 5G frequencies and health damage not demonstrated but cannot be excluded for a number of conditions
Therefore, the committee has investigated whether there are indications that electromagnetic fields with the frequencies of 5G have the potential to harm health. It has reviewed whether relations are known between exposure to radiofrequency electromagnetic fields on the one hand and the occurrence of diseases and conditions on the other. According to the committee, it cannot be excluded that the incidence of cancer, reduced male fertility, poor pregnancy outcomes and birth defects could be associated with exposure to radiofrequency electromagnetic fields. However, the committee deems the relation between exposure and these and other diseases or conditions neither proven nor probable.
The committee has also examined the possible relation between exposure to radiofrequency electromagnetic fields and changes in biological processes. It is probable that changes in electrical activity in the brain are associated with exposure, but it is not known whether that is favourable or unfavourable in health terms. For the majority of other biological processes it has neither been demonstrated nor is it probable that changes in them are associated with exposure to radiofrequency electromagnetic fields, although this cannot be excluded. Only for changes in the immune system and hormone levels, no relation was found. There has been almost no research into the effects of exposure to frequencies around 26 GHz.
The committee’s recommendations
The committee has made four recommendations to Parliament.
1. Because the lower frequency bands for 5G (up to 3.5 GHz) have already been used for telecommunications applications and Wi-Fi for years without resulting in any proven adverse health effects, the committee sees no reason to stop or restrict the use of these frequency bands. It does however recommend that the exposure should be monitored before, during and after the rollout of the 5G systems. This will show to what extent exposure to radiofrequency electromagnetic fields changes as a result of the introduction of 5G and any long-term health risks can then be estimated better. The WHO analysis can also be used in estimating the risks.
2. The committee recommends doing more research:
• epidemiological research into the relation between exposure to the 5G frequencies used and the incidence of cancer, reduced male fertility, poor pregnancy outcomes and birth defects. An ongoing international study into the use of mobile telephones, in which the Netherlands is participating, can play a role in this.
• experimental research into the health effects of exposure to electromagnetic fields in the 26 GHz frequency band.
• scenario studies to get a picture of the exposure of individuals as a result of wireless communications systems (3G, 4G and 5G).
3. The committee recommends not to use the 26 GHz frequency band for 5G for as long as the potential health risks have not been investigated.
4. Finally, the committee recommends using the latest guidelines from the International Commission on Non-Ionizing Radiation Protection (ICNIRP) as the basis for exposure policy in the Netherlands. Because it cannot be excluded that exposure under the latest ICNIRP standards also has the potential to affect health, the committee recommends to take a cautious approach and keep exposures as low as reasonably achievable."