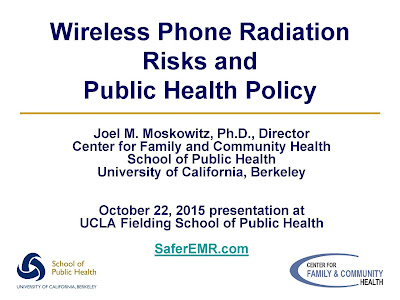 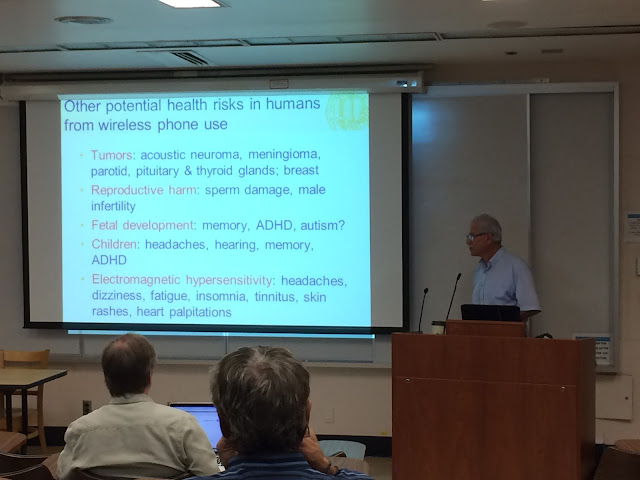 This presentation can be downloaded from
http://bit.ly/wirelessradiationUCLA102215.

See slides 33-39 for references to papers.

A common argument used to deny the existence of biologic and health effects from exposure to low-intensity microwave radiation is that there is no possible biologic mechanism.

What are the SAR values for Samsung’s Galaxy S6 and Galaxy S6 Edge?

What is the manufacturer's recommended minimum body separation distance?
How should consumers use this information?

Be sure to read the latest Consumer Reports safety warnings about cell phone use.

According to Samsung, the SAR for the current version of this phone is 1.09 w/kg at the head and 1.16 w/kg at the body. Samsung reports that, "Earlier versions may have different measured SAR values, which are detailed in the User Manuals that accompany those handsets."

The SARs for these models may also vary depending upon your specific cell phone carrier. All SARs reported above are averaged over one gram of body tissue (US standard).

According to Samsung, "Body-worn SAR testing has been carried out at a separation distance of 1.5 cm" (i.e., 15 mm or about 0.6 of an inch).  "To meet RF exposure guidelines during body-worn operation, the device should be positioned at least this distance away from the body."


Although the SARs for the Apple iPhone 6 and iPhone 6 Plus are somewhat higher, the body-worn SAR test was conducted at a separation distance of 5 mm (about 0.1 of an inch) so the body SAR values are not comparable to those reported for the Galaxy S6. The SAR values can be found in my article on Apple smart phones.

The Samsung Mobile Phone Health and Safety and Warranty Guide for the Samsung Galaxy S6 provides the following information on page 4: (http://bit.ly/1aWb0rB):

"This device has a FCC ID number: A3LSMG920T [Model Number: SM-G920T] and the specific SAR levels for this device can be found at the following FCC website: www.fcc.gov/oet/ea/.

The SAR information for this device can also be found on Samsung’s website: www.samsung.com/sar."

The Samsung SAR test reports have the following caveat from the testing laboratory:

“Please note that the absorption and distribution of electromagnetic energy in the body are very complex phenomena that depend on the mass, shape, and size of the body, the orientation of the body with respect to the field vectors, and the electrical properties of both the body and the environment.  Other variables that may play a substantial role in possible biological effects are those that characterize the environment (e.g. ambient temperature, air velocity, relative humidity, and body insulation) and those that characterize the individual (e.g. age, gender, activity level, debilitation, or disease).  Because various factors may interact with one another to vary the specific biological outcome of an exposure to electromagnetic fields, any protection guide should consider maximal amplification of biological effects as a result of field-body interactions, environmental conditions, and physiological variables.” (p. 66)  (1,2)

The Federal Communications Commission (FCC) requires that all cell phone models be tested for their Specific Absorption Rate or SAR. The SAR is a measure of the maximum amount of microwave radiation absorbed by the head or the body. It is measured in a laboratory using an artificial model of a large adult male with different fluids to simulate human tissue. The SAR, which is measured in watts per kilogram, represents the maximum amount of energy absorbed in any one gram of tissue in the test model. Phones sold in the U.S. typically range in SAR values from about 0.20 up to the 1.60 legal limit. (3, 4)

The FCC assumes that consumers will carry their cell phones in a manufacturer-approved holder that keeps the phone a minimum distance away from the body. However, most people do not keep their phone in a cell phone holder. For the SAR test, the FCC allows the manufacturer to choose the separation distance between the cell phone and the test model as long as consumers are informed about the minimum distance tested. Few consumers are aware of the manufacturer’s recommended minimum body separation distance from their cell phone because this information is often difficult to find. Thus, most consumers are in the dark about precautions they can take to keep their exposure to microwave radiation below the legal limit.

To ensure that the cell phone does not exceed the legal limit, consumers should never keep their cell phone in their pockets or next to their skin. The cell phone is not tested directly against the body because most cell phones would fail the SAR test as the radiation absorption increases dramatically when the cell phone is close to the body.

Federal policies in the U.S. would lead the public to believe that all legally-marketed cell phones are safe, and that a cell phone's SAR doesn't matter as long as it meets the legal limit: 1.6 watts per kilogram. (3, 4)

Based upon the weight of the evidence from several decades of research including thousands of peer-reviewed published studies, many experts worldwide have signed declarations calling upon government to adopt stronger radiation standards to protect consumers from low intensity, non-thermal exposures from radiation associated with wireless communications, and to alert consumers about how to reduce their risk of harm. (14 -16)

For tips on how to reduce exposure to wireless radiation, see "Some Tips to Reduce Your Exposure to Wireless Radiation". (17) In short, limit your use of the phone, keep the phone away from your body whenever it is powered on, use the phone hands-free, and turn off transmitters not in use (e.g., shut off Wi-Fi or use airplane mode).

(4) FCC. “Specific Absorption Rate (SAR) For Cell Phones: What It Means For You.” Undated.http://www.fcc.gov/guides/specific-absorption-rate-sar-cell-phones-what-it-means-you

(13) Joel Moskowitz. “Cell Phone Use and Prenatal Exposure to Cell Phone Radiation May Cause Headaches in Children.“http://www.prlog.org/12269207

(17) Joel Moskowitz. Some Tips to Reduce Your Exposure to Wireless Radiation  (one page handout). Undated. http://www.saferemr.com/2015/03/some-tips-to-reduce-your-exposure-to.html