Wearing Your Smartphone – Not Too Smart? 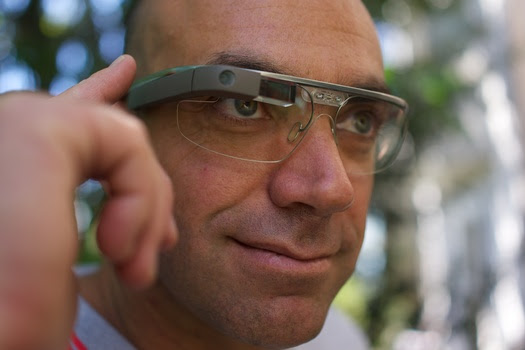 PHOTO: Google Glass (above), although not yet available to the general public, joins smart watches, wrist phones and all kinds of wearable cell phones and digital devices as highly desirable consumer products with the approach of the holiday season. Scientists are issuing health warnings, however. Courtesy Wikipedia.org.
NEW YORK - Wearable phones and computers are on loads of shopping lists as the holiday season approaches, but scientists are warning that research indicates they present likely health risks - especially from cell-phone radiation.

"I think all these radiation-emitting technologies deserve a proper evaluation that includes not only exposure to adults but what happens to the fetus, the most vulnerable stage of life," Taylor said.

Many scientists question the accuracy of industry-funded research. They say money for government and foundation-funded research is scarce, and that when they report on the evidence of risk, the mainstream media - like those lab mice - have a short attention span.

Dr. Martin Blank, retired associate professor of physiology and cellular biophysics at Columbia University and a DNA expert, said research like that which found the DNA of mice altered by cell-phone exposure is more than enough to prompt action.
"When you get a situation where a problem arises, you invoke what's known as the precautionary principle," he said. "You take a certain amount of precaution as a result of a risk that has been identified."

Gultekin said wearable gadgets are brought to the marketplace with little concern for safety.

"When they're designing and developing a new product and introducing it, very rarely the health aspects of it is mentioned, or not mentioned at all," he said.

Advocates recommend keeping cell phones and other devices away from sensitive body parts and especially caution pregnant women against holding cell phones near their abdomens or in handbags carried near their bodies.

Just as the lies about the health threats from cigarettes were eventually exposed by someone from inside the tobacco industry, Dr. Joel Moskowitz, director of the Center for Family and Community Health at the University of California-Berkeley School of Public Health, said he hopes the same will happen regarding the risks of electromagnetic fields.

"I've been waiting for a whistle-blower for the last five years since I've been involved in this issue, but haven't had any forthcoming, unfortunately," he said. "But if you know of any whistle-blowers and they want to send me documents, I can assure that they will be protected."

An educational forum for the public will bring together many of the leading experts on electromagnetic fields on Friday at the New York Open Center in New York City. More information is online at electromagnetichealth.org.

Why the FCC Must Strengthen Radiofrequency Radiation Limits in the U.S.


Why the FCC Must Strengthen Radiofrequency Radiation Limits in the U.S.

Submitted to the Federal Communications Commission
re: Proceeding Number 13-84.

The complete document (115 pp.) is available at: http://bit.ly/1bWfTLP

Since 2009, when my colleagues and I published a review of the research on mobile phone use and tumor risk in the Journal of Clinical Oncology1, I have advocated for stronger radiofrequency radiation limits that adequately protect children and adults from non-thermal as well as thermal health risks. Wireless devices must be tested in a manner that resembles how consumers actually use them, and the wireless industry should be required to provide to consumers meaningful disclosure of health risks and ways to reduce harm without pre-empting the rights of localities to require additional disclosures.

The paper is a compilation of press releases I have prepared since April, 2012, along with selected news articles related to these releases. These materials summarize the latest health research on wireless radiation and related public health policy developments.

In the last issue we explored the potential hazards of electromagnetic radiation from iPad use. We learned about warnings from the European parliaments and doctors' associations in various countries, and discussed the differences between pulsed digital wireless signals and continuous analogue radio waves. This time we are pleased to invite Dr. Joel Moskowitz to share his research findings regarding the health effects of cellphones.

I started studying the effects of cellphone radiation when Dr. Seung-Kwon Myung, a physician and epidemiologist from the National Cancer Center of South Korea, spent a year working in my center at UC Berkeley. He specializes in meta-analysis, a method by which data are combined across studies to generate more robust conclusions.

Since our study was published in the Journal of Clinical Oncology in 2009, I have reviewed hundreds of cellphone radiation studies. There is evidence that cellphone radiation may damage sperm and increase male infertility, increase risk of reproductive health problems, increase brain glucose metabolism, and alter EEG readings.

Many individuals have reported developing a sensitivity to cellphone radiation and other forms of radiofrequency energy.  They experience various allergic symptoms which may include ringing in their ears, headaches, dizziness, an irregular heartbeat, and memory and sleep problems. This condition, known as electromagnetic hypersensitivity, is considered a functional impairment in Sweden. The incidence of this condition, which is not easily diagnosed, appears to be increasing in many countries with the proliferation of “electrosmog.”

We need more research on the short-term and long term risks; risks to children and adolescents who are more vulnerable; reproductive health risks, and risks of newer technologies. We need to better understand the mechanisms that contribute to health effects and how to reduce the risks. Many scientists believe that there are mechanisms other than “heat” at work. Currently, the regulations adopted by most governments, including Canada and the U.S., only address the heating effect produced by cellphone radiation. They completely ignore biologic reactivity.

It's premature to estimate long-term tumor risk because tumors can take several decades to develop. A few studies suggest that the risk of glioma, a serious and often deadly brain tumor, doubles after 10 years of cellphone use. This could amount to an additional 10,000 cases per year in the U.S.

Many people have come to rely on their cellphones over land lines, and many children start using cellphones at a young age, so we may see increased risk in the future. On the other hand, changes in the pattern of use (e.g. hands-free, texting) can reduce health risks. Also, technology is changing; yet we don't know if newer technologies are safer or more harmful. It is difficult for scientific research about long-term effects to keep up with the speed at which companies bring forth new consumer radiofrequency microwave devices. This behooves us to practice precaution.

On June 28, 2012, the Environmental Working Group (EWG) reported: “EWG scientists have analyzed 10 scientific studies documenting evidence that cellphone radiation exposure leads to slower, fewer and shorter-lived sperm. The research raises concerns for men who carry their phones on their belts or in pants pockets. This conclusion is supported by a review paper recently published in the Journal of Andrology:

Infertility has become a mounting problem in America and Canada. According to Statistics Canada, infertility in Canada has almost doubled between 1992 and 2010, not just among couples who got married older, but also among younger couples in their 20's.

Many studies have found that exposure to low-intensity cellphone radiation can open the blood-brain barrier. This can enable toxins in the blood to penetrate the brain. A recent study found that children who used cellphones were more likely to exhibit ADHD (attention-deficit hyperactivity) symptoms than children who did not use them, but this effect was observed only among children who used cellphones who had slightly elevated lead levels in their blood. Moreover, in the children with some lead in their blood, the more they used their cellphones, the more likely they had ADHD symptoms.

On December 12, 2012, the American Academy of Pediatrics sent a letter to the U.S. Federal Communications Commission (FCC) requesting reassessment of cellphone exposure limits:


“Children are disproportionately affected...The differences in bone density and the amount of fluid in a child’s brain compared to an adult’s brain could allow children to absorb greater quantities of RF (radiofrequency) energy deeper into their brains than adults. It is essential that any new standards for cellphones or other wireless devices be based on protecting the youngest and most vulnerable populations to ensure they are safeguarded through their lifetimes.”

The U.S. Government Accountability Office (GAO) issued a report last summer calling on the FCC to update cellphone exposure limits and testing requirements. The report noted that the testing requirements are inadequate as cellphones are being used closer to the head and body than the test requires. Thus, actual users' exposure to cellphone radiation may exceed the legal limit.

Are all Cellphones Equal with regards to Radiation?

The amount of cellphone radiation your phone emits depends on various factors, including your location and distance from cell towers. Some cellphones generate as much as eight times more radiation than others. A measurement, called the SAR (Specific Absorption Rate), is available on the internet for every cellphone, but this measures the maximum amount of radiation emitted, not the typical amount. You can't find out how much radiation a phone generates during average daily use, which may be more important in terms of cumulative health risk. Some low SAR phones may generate more radiation on average than high SAR phones.

Your cellphone carrier also matters. One study shows that GSM phones can emit 28 times more radiation on average than CDMA phones. Another study shows GSM affects EEG readings more than CDMA. Your cellphone carrier determines which type of phone you have. In the U.S., people can choose to use a CDMA phone by selecting Verizon or Sprint; however, in Canada all carriers use GSM phones. Soon voice calls will use 4G technology, that is LTE, instead of GSM or CDMA.  More comparative studies on different carrier standards are needed, especially the newer standards.

Although further research is needed, we cannot afford to wait for conclusive evidence. There are more than 300 million cellphones in use in the U.S. Two-thirds of children eight and older use them. The government's regulations are outmoded and need to be revised. About a dozen nations have issued precautionary health warnings. It is time to publicize practical ways in which people can minimize their personal health risk. In addition, I have recommended an annual assessment of $1 on each cellphone. In the U.S., this would generate $300 million annually for vitally needed research and education.

Here are some practical steps which cellphone users can easily adopt:
Dr. Joel Moskowitz is on the research faculty at the University of California, Berkeley, School of Public Health. He has conducted research on chronic disease prevention and health promotion for more than 30 years, has authored dozens of peer-reviewed health publications, and is Director of UC Berkeley's Center for Family and Community Health.

For the online version of this magazine article including interesting graphics, see pages 8-9 of the Sept./Oct. issue of TheGreenGazette: http://bit.ly/18RXE7x

The effect of radiofrequency radiation on DNA and lipid damage in female and male infant rabbits. Guler, et al
http://www.healthandenvironment.org/uploads/docs/Guler_Effect_of_RFR_on_Infant_Rabbits_4-12.pdf

A prospective study of in-utero exposure to magnetic fields and the risk of childhood obesity. Li, et al
http://www.healthandenvironment.org/uploads/docs/Li_EMF_and_childhood_obesity_7-27-12.pdf


Collaborative on Health and the Environment:
http://www.healthandenvironment.org/partnership_calls/11452?res

BlackBerry: Keep Our Phones Away From Your Body
http://swampland.time.com/2010/10/15/blackberry-keep-our-...