Date: December 13, 2017Number: 17-086Contact: Corey Egel | 916.440.7259 | CDPHpress@cdph.ca.gov ​
SACRAMENTO – As smartphone use continues to increase in the U.S., especially among children, the California Department of Public Health (CDPH) today issued guidance for individuals and families who want to decrease their exposure to the radio frequency energy emitted from cell phones. Although the scientific community has not reached a consensus on the risks of cell phone use, research suggests long-term, high use may impact human health.
"Although the science is still evolving, there are concerns among some public health professionals and members of the public regarding long-term, high use exposure to the energy emitted by cell phones," said CDPH Director and State Public Health Officer Dr. Karen Smith. "We know that simple steps, such as not keeping your phone in your pocket and moving it away from your bed at night, can help reduce exposure for both children and adults."
Cell phones emit radio frequency energy when they send and receive signals to and from cell towers, and some scientists and public health officials believe this energy may impact human health.
Meanwhile, cell phone use in the U.S. has increased dramatically in recent years. About 95 percent of Americans own a cell phone, and 12 percent rely on their smartphones for everyday Internet access. In addition, the average age when children get their first phone is now just 10 years old, and a majority of young people keep their phones on or near them most of the day and while they sleep.
"Children's brains develop through the teenage years and may be more affected by cell phone use," said Dr. Smith. "Parents should consider reducing the time their children use cell phones and encourage them to turn the devices off at night."
The new CDPH guidance includes practical steps both adults and children could take to reduce exposure to radio frequency energy from cell phones. That includes:
https://www.cdph.ca.gov/Programs/OPA/Pages/NR17-086.aspx 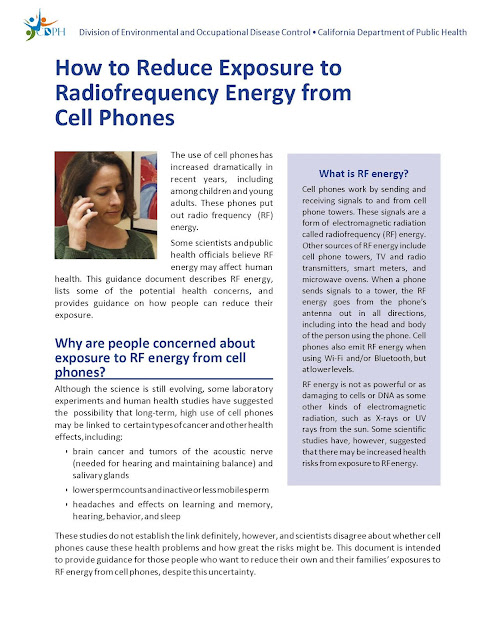 Increased Brain Tumor Risk from Wireless Phone Use:
2017 Supplement to the BioInitiative Report


Radio frequency radiation should be classified as “carcinogenic to humans” (Group 1).


In May, 2011, radio frequency radiation (RFR) was classified as a ”possible” human carcinogen (Group 2B) by the International Agency for Research on Cancer (IARC) of the World Health Organization (WHO) based upon an increased risk for glioma and acoustic neuroma observed in human epidemiological studies.

Since then, RFR exposure has increased in most countries as few countries took any precautionary actions due to confusion sowed by the wireless industry. The emerging fifth generation of wireless technology, known as 5G, will further increase RFR exposure.

The RFR exposure limits adopted by most countries were established in 1998 by the International Commission on Non-Ionizing Radiation Protection (ICNIRP). The limits were based on short-term thermal (heating) effects from RFR and ignored non-thermal biological effects.

Although the ICNIRP guidelines were updated in 2009, they still do not cover long-term health risks from non-thermal exposures.  ICNIRP’s current RFR exposure limits are 2 to 10 W/m2 depending on frequency. ICNIRP has 14 members; many have ties to industries that want to maintain these permissive guidelines.

In contrast to ICNIRP, in 2007 27 RFR scientists reviewed the literature on non-thermal health effects and released the BioInitiative Report. In 2012 when the report was updated, the authors concluded that health risks can be observed with an RFR exposure of 30 to 60 μW/m2. Applying a safety factor of 10, they proposed a precautionary target level of 3–6 μW/m2 which corresponds to three hundred thousand to three million times less exposure than the ICNIRP limits allow.

This supplement to the BioInitiative Report written by Lennart Hardell and Michael Carlberg examines the case-control research on brain tumor risk published since 2011 when IARC classified RFR as “possibly carcinogenic.”

The report finds consistent evidence of increased risk for glioma and acoustic neuroma associated with mobile phone and cordless phone use. These results are supported by results from animal studies showing genotoxic, co-carcinogenic, and tumor-promoting effects from RFR. Animal research finds evidence for an indirect mechanism for RFR-induced cancer, namely, oxidative stress on the cells leading to free radical production and DNA damage.

The supplement concludes that RFR should now be classified as “carcinogenic to humans” (Group 1) based on the IARC definition for this category:

The supplement to the BioInitiative Report is available at: http://bit.ly/bioinitbrain2017.

"The nine Bradford Hill viewpoints on association or causation regarding RF radiation and glioma risk seem to be fulfilled in this review. Based on that we conclude that glioma is caused by RF radiation. Revision of current guidelines for exposure to RF radiation is needed."

Objective. Bradford Hill's viewpoints from 1965 on association or causation were used on glioma risk and use of mobile or cordless phones.

Methods. All nine viewpoints were evaluated based on epidemiology and laboratory studies.

Specificity: increased risk for glioma was in the temporal lobe. Using meningioma cases as comparison group still increased the risk.

Analogy: there is an increased risk in subjects exposed to extremely low-frequency electromagnetic fields.

Conclusion. RF radiation should be regarded as a human carcinogen causing glioma.