To learn why it is important to reduce your exposure to wireless radiation see my Welcome to EMR Safety page for an overview of the health risks including presentations, radio interviews, and podcasts.
This page contains safety tips from various organizations on how to reduce your exposure to wireless radiation from cell phones, cordless phones, laptops, tablets, Wi-Fi routers, and other wireless technology.
To download the following one-page handout click on the link:  https://bit.ly/wirelesstipsheet 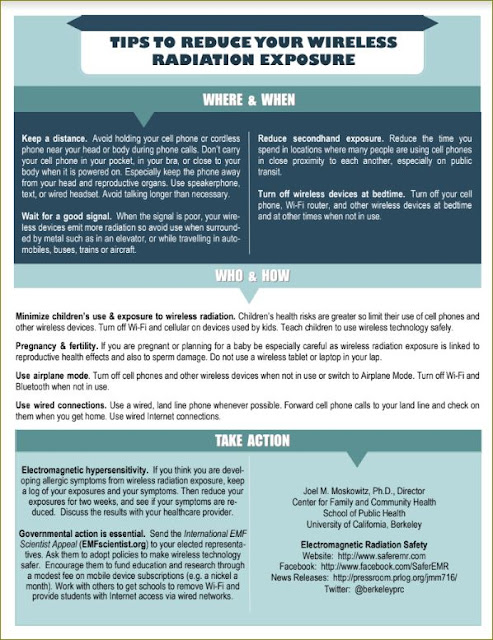 Children are almost constantly exposed to wireless radiation, starting as early as the first weeks of life. As they get older, that exposure grows every day, thanks to the widespread use of smartphones, laptops and other wireless devices in the classroom and at home.

Wireless devices radiate radiofrequency electromagnetic fields. Research has raised concerns about the health risks of exposure to this radiation, including harm to the nervous and reproductive systems, and higher risk of cancer. Cell phone radiation was classified a “possible carcinogen” in 2011 by the International Agency for Research on Cancer, part of the World Health Organization. The agency said human epidemiological studies showed a link between higher risk of a type of malignant brain cancer and cell phone use.

Parents and caregivers can exert more control over their kids’ wireless radiation exposure at home than at school, and have more latitude to try new ways of using devices.

To begin, inventory your home’s electronic devices. Consider smart speakers, cordless phones and mouses, gaming consoles, cell phones, wireless security systems and electric alarm clocks, among other types of technology. Even things you might not think emit electromagnetic radiofrequency radiation, like Fitbits and other wearable fitness devices, are a source of wireless radiation exposure and best for young kids to avoid.

The first, easiest-to-implement option is to increase the distance between your child and wireless devices in the home. The more distance, the less exposure.

Wired headphones or the speaker mode on a cell phone can put distance between the device and kids’ bodies. They should carry the device in a backpack or bag, not a pocket.

When no one is actively using the device, make sure it’s in airplane mode. Otherwise, the device will keep seeking the “signal” – it will continue trying to communicate with nearby cell towers, producing unnecessary radiation.

Another simple but important fix: Locate routers and cordless phone base stations – the worst radiation offenders – away from where your kids sleep, study and play. See if you can lower your Wi-Fi router’s output. It may be set to “High” as a default, which could create more intense wireless radiation output than anyone in your household needs.

To reduce radiation exposures significantly, many experts recommend using wired devices whenever possible. Make replacing wireless headphones with wired your first step then, over time, choose auxiliary devices that plug in or are battery-powered, including keyboards, mouses and microphones. Wireless earbuds also emit radiofrequency radiation, so limit the use of such devices, especially for children and youth.

Here are some other ways to reduce exposure to electromagnetic radiation from wireless.

Parents and caregivers don’t have nearly as much control at school over how much their child is exposed to wireless radiation as they do at home. And with technology ever more prevalent in educational settings, chances are kids are close to a variety of devices all day.

Nearly half of U.S. schools report having a computer for every child, according to a Department of Education study. Another 37 percent have a computer for each child in some age groups. In some cases, kids may take the device home with them for long or short periods. The survey also said 70 percent of teachers use technology in the classroom.

It’s tough to shield your child from wireless radiation exposure entirely. But you can take steps to lower their exposure based on advice published by experts. Start by approaching school administrators with your concerns. Learn your school or district’s cell phone policy. If none exists, request that a committee be formed to develop a policy and plan trainings for teachers about safe technology use.

Here are a few ideas teachers can implement in the classroom or that schools and school districts can use. The gold standard: Whenever possible, use wired connections for laptops, tablets, interactive white boards, printers and other devices.

Wireless technology use during the pandemic

From the start of the coronavirus pandemic, wireless technology became the main path for accessing education and participating in virtual classrooms for kids and families in the U.S. and across the globe. In 2020, a survey found nearly half of 2- to 4-year-olds and about two in three kids ages 5 to 8 already owned their own mobile devices, a tablet or smartphone – and that was before the Covid-19-related school closures prompted desperate working parents nationwide to employ wireless devices as babysitters and educators.

That’s many kids with constant access to wireless devices – and also exposed to the health risks of wireless radiation. Parents have taken note of these potential harms. A European citizens group coalition in March called for simple steps to protect kids by swapping wireless for cables in places where children spend time and educating the public about the dangers of exposure.

To find additional resources, advocacy guidance, tip sheets and other useful suggestions, consult the websites of one of these organizations:

https://www.ewg.org/news-insights/news/2022/11/protecting-kids-wireless-radiation-school-and-home
---
Safety Recommendations for Children Who Use Digital Technologies to Study at Home
Scientific Research Institute of Hygiene and Children's Health in the Russian Ministry of Health
and the Russian National Committee on Non-Ionizing Radiation Protection (RusCNIRP)
March 25, 2020
(The recommendations were translated from Russian using Google's translation tool and then edited for easier reading on the Electromagnetic Radiation Safety website.)
The following recommendations for distance learning at home are intended for children (up to 18 years of age) and their parents and grandparents and anyone who helps children study at home using digital technologies.

1. Children under 18 years of age who study at home should primarily use personal computers and laptops connected to the Internet via a wired network. When using a wireless network, the distance from the Wi-Fi router to the student should be at least 5 meters (16 feet).

3. Before using the keyboard wash the hands of both the child and the adult who helps him or her.

4. To reduce the risk of visual impairment and musculoskeletal system disorders, provide a child working at a computer or laptop with a convenient workplace (the height of the table and chair should correspond to the height of the child), to exclude the illumination of the monitor screen.

6. The use of tablets for distance learning at home is acceptable for adolescents over 15 years old. Before using the tablet, you need to wash your hands and wipe the screen with a disinfectant (wet towel). The location of the Wi-Fi point should be at least 5 meters (16 feet) from the student’s workplace. The tablet is placed on the table on a stand at an angle of 30 degrees, the distance from the screen to the pupil’s eyes is at least 50 centimeters (20 inches). Do not use a laptop or tablet on your lap, in your hands, lying down and the like.
7. For all age groups: completely avoid use of smartphones for educational purposes (reading, searching for information)
8. For all age groups: for reading or completing tasks, mainly use ordinary books and notebooks.

9. Children under 6 years old must not use any computer equipment for educational purposes at home.

The total duration of all types of screen activities for children 12 to 18 years of age, including watching TV, should not exceed 3.5–4 hours per day.

13. If necessary to use headphones limit their continuous use: no more than an hour at a volume of not more than 60%.

14. Ventilate the room where the students study, before the start of classes (at least 15 minutes) and after each hour of work.

15. Do not use tablets and smartphones for educational purposes outdoors (in the park, on the playground and similar places).
The above recommendations are based upon research from multicenter studies on children's health and safety while using digital educational technologies, materials from the Scientific Research Institute of Hygiene and Children's Health “NRCM of Children's Health,” and the Russian National Committee for Protection against Non-Ionizing Radiation, as well as recommendations from the World Health Organization and the best safety practices for children's digital educational environments.
--

In December, 2017, the California Department of Public Health captured worldwide attention when it published an official cell phone safety document,"How to Reduce Exposure to Radiofrequency Energy from Cell Phones." The three-page document is available at http://bit.ly/CDPHguidance.


In March, 2017, before the judge could finalize her ruling in a lawsuit we filed under the Public Records Act, the California Department of Public Health released an unofficial cell phone safety document, "Cellphones and Health," dated April, 2014. The document was originally written in 2009 but never released to the public. More information is available on my web site.
More Safety Tips

Baby Safe Project. "What You Need to Know about Wireless Radiation and Your Baby."
bit.ly/BabySafeEMR

Electrosensitive Society. "How to reduce your exposure: Electromagnetic hygiene in 12 easy steps. http://bit.ly/ESsafetytips