WHO Monograph on Cancer Risk from Mobile Phone Use Released 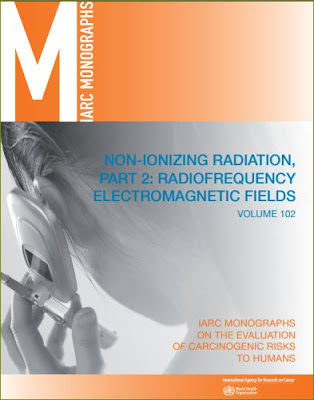 The World Health Organization concludes there is “limited evidence” in both humans and laboratory animals for the carcinogenicity of radiofrequency radiation, especially from cell phones.


The International Agency for Research on Cancer (IARC) of the World Health Organization (WHO) published its long-awaited monograph on the cancer risk to humans from exposure to cell phone radiation and other radiofrequency electromagnetic fields. The primary focus of the review is on the microwave radiation emitted by cell phones.

According to the monograph, “Radiofrequency electromagnetic fields are possibly carcinogenic to humans (Group 2B).” (p. 421) Children are particularly vulnerable to this carcinogenic effect as “the average exposure from use of the same mobile phone is higher by a factor of 2 in a child’s brain and higher by a factor of 10 in the bone marrow of the skull.” Also, the child’s brain is developing at a greater rate than the adult brain.

This 471 page report is based on the consensus of a Working Group of 31 international experts who met in Lyon, France in May, 2011. Although a few studies published since this meeting were included in this monograph, other recent studies that further support the evidence for increased cancer risk due to exposure to cell phone radiation were not reviewed.

The monograph only examines research on cancer risk. Other research has found that cell phone radiation has additional harmful effects on humans, especially on sperm and the fetus.

Following are what I consider to be the most important quotes from the monograph. I highlighted some phrases with boldface type.

From IARC's "Note to the Reader"

"The term ‘carcinogenic risk’ in the IARC Monographs series is taken to mean that an agent is capable of causing cancer...identification of cancer sites with sufficient evidence or limited evidence in humans should not be viewed as precluding the possibility that an agent may cause cancer at other sites. The evaluations of carcinogenic risk are made by international working groups of independent scientists and are qualitative in nature. No recommendation is given for regulation or legislation.”

“While the number of mobile-phone subscriptions has been increasing rapidly around the world (4.6 billion subscribers in 2009), changes in mobile-phone technology have led to lower time-averaged RF power emitted from mobile phones used at present than those of previous generations. Of major interest to this Monograph is the exposure scenario in which mobile phones are held against the ear during a voice call.” (p. 407)

“GSM 900/1800/PCS phones (Global System for Mobile communications/Personal Communications Service, operating at 900 or 1800 MHz) held next to the ear induce high spatial-averaged SAR values in the brain. This is because adaptive power control on average only reduces the output power to about 50% of its maximum during calls, but this would vary depending on the network software.” (p. 408) [SAR or Specific Absorption Rate is a measure of the maximum amount of radiation absorbed in the brain from a cell phone or cordless phone, averaged over a specific volume of tissue for a specific period of time.]

“Adaptive power control is much more effective with third-generation (3G) phone technologies, and this has led to a reduction of SAR in the brain by almost two orders of magnitude compared with that from GSM phones. The DECT (Digital Enhanced Cordless Telecommunications) phone is another widely used device that is held against the ear to make and receive voice calls. The average SAR in the brain from use of DECT phones is around five times lower than that measured for GSM phones … The spatial maximum exposure from cordless DECT phones is an order of a magnitude lower than that from mobile phones.” (p. 408) [DECT phone technology is used in cordless phones used in homes and offices.]


“In terms of cumulative call time, all odds ratios were uniformly below unity for all deciles of exposure except for the highest decile (≥ 1640 hours of cumulative call time). For this exposure group, the odds ratio for glioma was 1.40 (95% CI, 1.03–1.89). Some other analyses of the same data also pointed to a possible association of mobile-phone use with risk of glioma, including the findings related to location of tumour (a higher odds ratio for tumours in the temporal lobe) and laterality of mobile-phone use (an apparently higher odds ratio in those who used a mobile phone on the same side of the head as the tumour). In an attempt to obviate the distortions that might have been generated by differential non-participation, an analysis was conducted with the lowest exposure decile as the reference; this showed a high odds ratio in the highest exposure decile.” (p. 411)

Comparison of INTERPHONE and Swedish Studies


“Overall, the Working Group reviewed all the available evidence with regard to the use of wireless phones, including both mobile and cordless phones, and the risk of glioma. Time trends were considered, as were several early case–control studies and one cohort study. The evidence from these studies was considered less informative than the results of the INTERPHONE study and the Swedish case–control study. While both of these are susceptible to bias, the Working Group concluded that these findings could not be dismissed as reflecting bias alone, and that a causal interpretation was possible.”

“In considering the evidence on acoustic neuroma, the Working Group considered the same methodological concerns as for glioma, but concluded that bias was not sufficient to explain the positive findings, particularly those of the study from Sweden.” (p. 412) [My note: positive findings refers to increased tumor risk]

“For meningioma, the same two studies mentioned above provided the key evidence. Overall, in each, the findings generally indicated no increase in risk.” (p. 412)

“The Working Group found the evidence to be insufficient to reach a conclusion as to the potential association of mobile-phone use and either leukaemia or lymphoma.” (p. 412)

“Evidence to date does not point to a causal association of mobile-phone use with the various additional malignancies addressed, including ocular or cutaneous melanoma, cancer of the testis, cancer of the breast, or tumours of the parotid gland.” (p. 412)

“There is limited evidence in experimental animals for the carcinogenicity of radiofrequency radiation.” (p. 412)

“The comparative weakness of the associations in the INTERPHONE study and inconsistencies between its results and those of the Swedish study led to the evaluation of limited evidence for glioma and acoustic neuroma, as decided by the majority of the members of the Working Group. A small, recently published Japanese case–control study, which also observed an association of acoustic neuroma with mobile phone use, contributed to the evaluation of limited evidence for acoustic neuroma.” (p. 421)

The complete monograph can be downloaded from the IARC web site: