On November 24, 2020, the U.S. Government Accountability Office (GAO) published a report on 5G. The GAO recognizes that public concern regarding the health effects from exposure to radiofrequency radiation (RFR) is likely to intensify with the deployment of 5G technology.

The report acknowledges that policy makers are faced with a challenge as they need relevant information on the health effects of 5G, but long-term effects are unknown. The report recommends that "(p)olicymakers will need to identify a funding source or determine which existing funding streams to reallocate" to pay for the needed research.

The GAO interviewed government officials who dismissed the research on RFR health effects: "Officials from federal regulatory and research agencies did not indicate any cause for alarm due to these unknowns because of the research from observational studies on pre-5G technology and from experimental studies of high-band 5G technology."

"In 2008, a committee convened by the National Research Council (part of the National Academies of Sciences, Engineering, and Medicine) reported that further research was needed to characterize exposure to RF energy in juveniles, young children, and pregnant women and fetuses in observational studies." So why didn't our government fund the research needed to ask the critical questions re: RFR exposure that would enable our health agencies to adopt protective safety limits?

"While research on the biological effects of RF energy has been underway for decades, FDA officials do not expect changes to the current safety standards from 5G technology."

For more than two decades, FDA officials have ignored the lack of consensus in the scientific community regarding the safety of RFR. The majority of scientists who study RFR effects now believe that current RFR national and international safety standards are inadequate to protect our health. More than 240 scientists from 44 countries who have published over 2,000 papers in professional journals on electromagnetic fields (EMF) and biology or health have signed the International EMF Scientist Appeal which calls for stronger safety standards and health warnings.

The GAO report also failed to mention the 5G Appeal signed by more than 400 scientists and doctors who have demanded a moratorium on the deployment of 5G.

As with previous generations of mobile wireless technology, the full performance of 5G will be achieved gradually as networks evolve over the next decade. Deployment of 5G network technologies in the U.S. began in late 2018, and these initial 5G networks focus on enhancing mobile broadband. These deployments are dependent on the existing 4G core network and, in many areas, produced only modest performance improvements. To reach the full potential of 5G, new technologies will need to be developed. International bodies that have been involved in defining 5G network specifications will need to develop additional 5G specifications and companies will need to develop, test, and deploy these technologies. GAO identified the following challenges that can hinder the performance or usage of 5G technologies in the U.S. 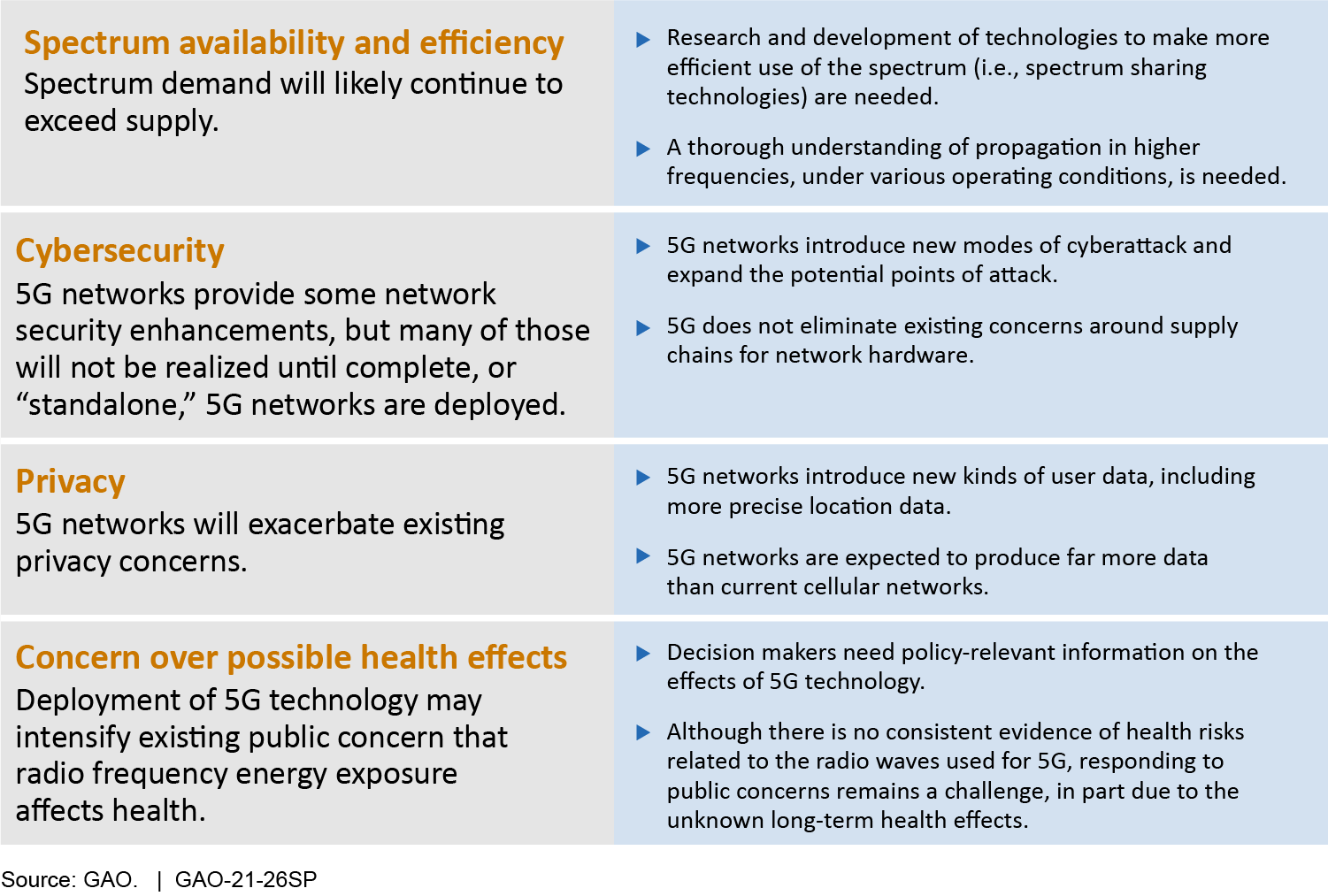 GAO developed six policy options in response to these challenges, including the status quo. They are presented with associated opportunities and considerations in the following table. The policy options are directed toward the challenges detailed in this report: spectrum sharing, cybersecurity, privacy, and concern over possible health effects of 5G technology.

Policy options to address challenges to the performance or usage of U.S. 5G wireless networks

Why GAO Did This Study

GAO was asked to assess the technologies associated with 5G and their implications. This report discusses (1) how the performance goals and expected uses are to be realized in U.S. 5G wireless networks, (2) the challenges that could affect the performance or usage of 5G wireless networks in the U.S., and (3) policy options to address these challenges.

To address these objectives, GAO interviewed government officials, industry representatives, and researchers about the performance and usage of 5G wireless networks. This included officials from seven federal agencies; the four largest U.S. wireless carriers; an industry trade organization; two standards bodies; two policy organizations; nine other companies; four university research programs; the World Health Organization; the National Council on Radiation Protection and Measurements; and the chairman of the Defense Science Board's 5G task force. GAO reviewed technical studies, industry white papers, and policy papers identified through a literature review. GAO discussed the challenges to the performance or usage of 5G in the U.S. during its interviews and convened a one-and-a-half day meeting of 17 experts from academia, industry, and consumer groups with assistance from the National Academies of Sciences, Engineering, and Medicine.

GAO received technical comments on a draft of this report from six federal agencies and nine participants at its expert meeting, which it incorporated as appropriate.

"We provided a draft of this product to the Departments of Commerce, Energy, and Health and Human Services; DHS; DOD; FCC; and NSF for their review. DOD told us that they had no technical comments on the draft report; the remaining six agencies provided technical comments, which we incorporated as appropriate. Participants in our expert meeting from CTC Technology & Energy, CTIA, Google, Illinois Institute of Technology, National Consumer Law Center, Nokia—North and South America, PwC, University of Colorado, and U.S. Cellular also reviewed a draft of this product; we incorporated their technical comments as appropriate."
Appendix I
"To understand the health effects of wireless technology, we interviewed officials from the Department of Health and Human Services, the National Council on Radiation Protection and Measurements, and the World Health Organization; reviewed safety standards; and reviewed assessments published by DOD, FDA, and the National Institutes of Health. We also requested and reviewed a DOD bibliography of peer-reviewed articles, technical notes, technical reports, and special reports published in fiscal years 1997 through 2019 on the physiological effects of microwave or millimeter wave energy."
Footnotes
93 The RF spectrum used in cellular communications has not been definitively linked to cancer or other health outcomes, according to FCC and FDA. The lower frequencies of the radio frequency spectrum that are used for wireless communication, including 5G communication, are considered “nonionizing radiation” because these frequencies lack sufficient energy to remove electrons from atoms and molecules. In contrast, X-rays are considered “ionizing” radiation, which can have significant human health effects and are known to increase the risk of cancer. The radio frequencies used by cellular communications systems can lead to tissue heating, but is not thought to emit enough RF energy to cause harmful heating.
94 The U.S. Court of Appeals for the Ninth Circuit dismissed a challenge claiming that FCC failed to reassess its RF exposure limits, because, by the time of the decision, FCC had completed its evaluation of the effects of 5G technology on its RF updated. City of Portland v. United States, 969 F.3d 1020, 1046-47 (9th Cir. 2020). FCC’s evaluation and decision not to update its RF exposure limits is currently being challenged in the D.C. Circuit Court of Appeals. Brief of Petitioners at 65-69, Environmental Health Trust v. FCC, No. 20-1025 (D.C. Cir. July 29, 2020).
95 Experimental studies are those in which the exposure to RF energy is determined by the investigator. Observational studies are those where exposure to RF energy is observed (usually reported or measured).
96 NCI reviewed the Interphone, Million Women Study, Danish Registry Linkage Study, which all evaluated 2G and 3G technologies; RF exposure from high-band 5G technology was not evaluated in these studies.
97 National Research Council, Identification of Research Needs Relating to Potential Biological or Adverse Health Effects of Wireless Communication Devices, National Academies Press (Washington, D.C.: 2008).
98 While other organizations synthesize the literature on RF energy and health outcomes, we focus on the three organizations (FDA, IEEE, and NCRP) that FCC principally relies on for synthesizing the literature and providing recommendations for setting RF safety standards. NCRP was chartered in law by the U.S. Congress in 1964 to collect, analyze, and disseminate information and recommendations about radiation protection in the public interest. Pub. L. No. 88-376, 78 Stat. 320 (1964). The International Commission on Non-ionizing Radiation Protection (ICNIRP) also synthesizes experimental and observational studies. It is an independent, non-governmental organization chartered in Germany that provides guidelines followed by several European Union countries. IEEE and ICNIRP have been working to harmonize their standards.
99 FDA, Review of Published Literature between 2008 and 2018 of Relevance to Radiofrequency Radiation and Cancer (Silver Spring, Md.: February 2020).
100 According to IEEE officials, the standards have a 10-year revision cycle. However, the standard is a “living” document that may be revised sooner, for example, if the conclusions of an ongoing World Health Organization Environmental Health Criteria systematic review reveal any significant results.
101 NCRP Report No. 86, Biological Effects and Exposure Criteria for Radiofrequency Electromagnetic Fields, 1986. According to an NCRP official, NCRP produces reports at the request and funding of federal agencies. NCRP has not been funded to update Report No. 86.
102 Observational studies may be prospective or retrospective. In prospective studies, participants are enrolled and data are collected on their current exposures. Then, participants are followed up over a period of time (some cohort studies have been ongoing for years) to observe outcomes that develop. In retrospective studies, participants are enrolled and asked about exposures and outcomes that have already occurred. The benefit of a prospective study is that it is less subject to recall bias, which may be present in retrospective studies where outcomes are known and participants are asked to report past exposure.