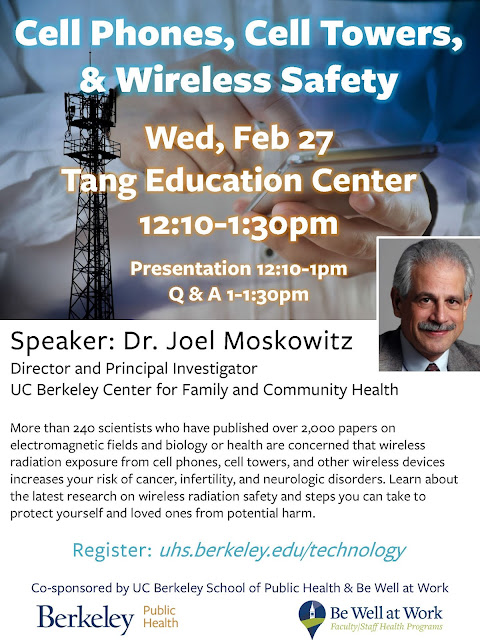 When the first cell phone went on the market in the U.S. in 1984, it was big, clunky and very expensive. The Motorola DynaTAC sold for a whopping $3,995. That’s almost $10,000 today. And, to make it even less worth the investment, it got bad reception because there were very few cell towers in the country at the time.

But, as we all know, cell phones have come a long way. In addition to making calls on our phones, we can do pretty much everything else on them, too, just like Apple promised we would in 2007, the year the iPhone made its debut.

As of 2017, there were 273 million smartphones in use in the U.S and 5 billion subscriber connections worldwide, according to Joel Moskowitz, director of UC Berkeley’s Center for Family and Community Health at the School of Public Health.

“This is a big, big business,” says Moskowitz, whose research led to the California Department of Public Health publishing cell phone radiation safety guidelines in December 2017. “The industry as a whole spends about $100 million a year lobbying Congress. This is an industry that’s probably been unparalleled by any other industry in the world, in terms of reach.”

Moskowitz gave a talk last spring called “Cell Phones, Cell Towers and Wireless Safety” for Be Well at Work, a University Health Services program at UC Berkeley for staff and faculty to improve employee health and well-being. The event was co-sponsored by the School of Public Health.

Moskowitz, who has conducted research on disease prevention programs and policies for more than 30 years, says that with the influx of smartphones has come hundreds of thousands of cell towers. These towers receive and transmit radio frequencies called microwaves — the same waves used in microwave ovens.

In 2011, the International Agency for Research on Cancer (IARC) of the World Health Organization classified radio frequency radiation as possiblycarcinogenic to humans, based on studies of cell phone radiation and brain tumor risk in humans.

“Currently, we have considerably more evidence that would warrant a stronger classification,” says Moskowitz, an adviser to the International EMF Scientist Appeal signed by more than 240 scientists who publish peer-reviewed research on electromagnetic radiation. “Many scientists today feel that it’s time for IARC to re-review the literature given all the research that’s been published since 2011 to upgrade this to at least ‘probably carcinogenic to humans,’ if not actually ‘carcinogenic.’”

To reduce the risk of harm, Moskowitz recommends that we:


Learn more about Moskowitz’s research on his website: saferemr.com.

Slides: http://bit.ly/UCB2-27-19jmm (Supplemental slides can be found at end of presentation.)

On February 27, 2019, Joel Moskowitz, Ph.D., delivered the keynote presentation, "Cell Phones, Cell Towers and Wireless Safety" for the "Balancing Technology" series offered by University Health Services (UHS) at the University of California, Berkeley. The event was co-sponsored by the UC Berkeley School of Public Health.

Dr. Moskowitz, director of the UC Berkeley Center for Family and Community Health, has been translating and disseminating the research on wireless radiation health effects since 2009. His Electromagnetic Radiation Safety website has had more than two million page views by visitors from over 200 countries since 2013.

The presentation was filmed by UHS and by CNBC. The video, slides, and safety tips can be viewed at the following links: