Ambient levels of electromagnetic fields (EMF) have risen sharply in the last 80 years, creating a novel energetic exposure that previously did not exist. Most recent decades have seen exponential increases in nearly all environments, including rural/remote areas and lower atmospheric regions. Because of unique physiologies, some species of flora and fauna are sensitive to exogenous EMF in ways that may surpass human reactivity. There is limited, but comprehensive, baseline data in the U.S. from the 1980s against which to compare significant new surveys from different countries. This now provides broader and more precise data on potential transient and chronic exposures to wildlife and habitats. Biological effects have been seen broadly across all taxa and frequencies at vanishingly low intensities comparable to today’s ambient exposures. Broad wildlife effects have been seen on orientation and migration, food finding, reproduction, mating, nest and den building, territorial maintenance and defense, and longevity and survivorship. Cyto- and geno-toxic effects have been observed. The above issues are explored in three consecutive parts: Part 1 questions today’s ambient EMF capabilities to adversely affect wildlife, with more urgency regarding 5G technologies. Part 2 explores natural and man-made fields, animal magnetoreception mechanisms, and pertinent studies to all wildlife kingdoms. Part 3 examines current exposure standards, applicable laws, and future directions. It is time to recognize ambient EMF as a novel form of pollution and develop rules at regulatory agencies that designate air as ‘habitat’ so EMF can be regulated like other pollutants. Wildlife loss is often unseen and undocumented until tipping points are reached. Long-term chronic low-level EMF exposure standards, which do not now exist, should be set accordingly for wildlife, and environmental laws should be strictly enforced.

Ambient background levels of EMF have risen sharply in the last four decades, creating a novel energetic exposure that previously did not exist at the Earth’s surface, lower atmospheric levels, or underwater environments. Recent decades have seen exponential increases in nearly all environments, including remote regions. There is comprehensive but outdated baseline data from the 1980s against which to compare significant new surveys from other countries which found increasing RFR levels in urban, suburban and remote areas, primarily from cell infrastructure/phone/WiFi exposures. One indicative comparison of similar sites between 1980 and today found a 70-fold (7,000%) increase in ambient RFR [149]. The increased infrastructure required for 5G networks will widely infuse the environment with new atypical exposures, as are increasing satellite systems communicating with ground-based civilian networks. The new information provides broader perspective with more precise data on both potential transient and chronic exposures to wildlife and habitats. Biological effects have been seen broadly across all taxa at vanishingly low intensities comparable to today’s ambient exposures as examined in Part 2. The major question presented in Part 1 was whether increasing anthropogenic environmental EMF can cause biological effects in wildlife that may become more urgent with 5G technologies, in addition to concerns over potentially more lenient allowances being considered by major standards-setting committees at FCC and ICNIRP (examined in Part 3). There are unique signaling characteristics inherent to 5G transmission as currently designed of particular concern to non-human species. Background levels continue to rise but no one is studying cumulative effects to nonhuman species.
379 references.
--
Electromagnetic radiation as an emerging driver factor for the decline of insects

• Biodiversity of insects is threatened worldwide
• This reductions is mainly attributed to agricultural practice and pesticide use
• There is sufficient evidence on the damage caused by electromagnetic radiation
• Electromagnetic radiation may be a complementary driver in this decline
• The precautionary principle should be applied before any new deployment (e.g. 5G)

The biodiversity of insects is threatened worldwide. Numerous studies have reported the serious decline in insects that has occurred in recent decades. The same is happening with the important group of pollinators, with an essential utility for pollination of crops. Loss of insect diversity and abundance is expected to provoke cascading effects on food webs and ecosystem services. Many authors point out that reductions in insect abundance must be attributed mainly to agricultural practices and pesticide use. On the other hand, evidence for the effects of non-thermal microwave radiation on insects has been known for at least 50 years. The review carried out in this study shows that electromagnetic radiation should be considered seriously as a complementary driver for the dramatic decline in insects, acting in synergy with agricultural intensification, pesticides, invasive species and climate change. The extent that anthropogenic electromagnetic radiation represents a significant threat to insect pollinators is unresolved and plausible. For these reasons, and taking into account the benefits they provide to nature and humankind, the precautionary principle should be applied before any new deployment (such 5G) is considered.
https://www.sciencedirect.com/science/article/abs/pii/S0048969720384461
-- 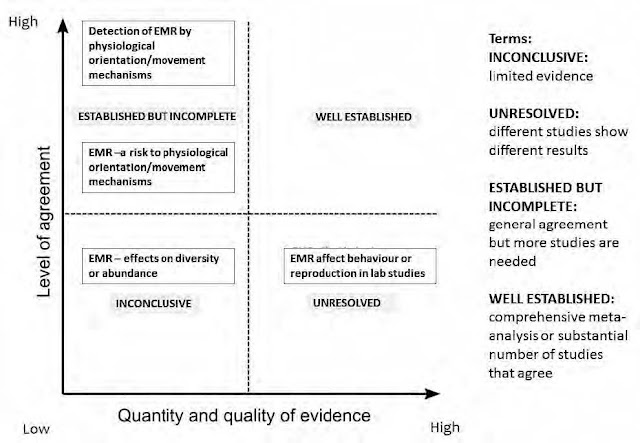 • Anthropogenic electromagnetic radiation (light, radiofrequency) is perceived to threaten pollinators and biodiversity.
• Potential risks are artificial light at night (ALAN) and anthropogenic radiofrequency electromagnetic radiation (AREMR).
• We assessed the quantity and quality of evidence, and the level of consensus, to distil key messages for science and policy.
• ALAN can alter pollinator communities and functions, although this remains to be well established.
• Evidence of AREMR impacts is inconclusive due to a lack of high quality, field-realistic studies.
• Whether pollinators and pollination face a threat from the spread of ALAN or AREMR remains a major knowledge gap.

Worldwide urbanisation and use of mobile and wireless technologies (5G, Internet of Things) is leading to the proliferation of anthropogenic electromagnetic radiation (EMR) and campaigning voices continue to call for the risk to human health and wildlife to be recognised. Pollinators provide many benefits to nature and humankind, but face multiple anthropogenic threats. Here, we assess whether artificial light at night (ALAN) and anthropogenic radiofrequency electromagnetic radiation (AREMR), such as used in wireless technologies (4G, 5G) or emitted from power lines, represent an additional and growing threat to pollinators. A lack of high quality scientific studies means that knowledge of the risk to pollinators from anthropogenic EMR is either inconclusive, unresolved, or only partly established. A handful of studies provide evidence that ALAN can alter pollinator communities, pollination and fruit set. Laboratory experiments provide some, albeit variable, evidence that the honey bee Apis mellifera and other invertebrates can detect EMR, potentially using it for orientation or navigation, but they do not provide evidence that AREMR affects insect behaviour in ecosystems. Scientifically robust evidence of AREMR impacts on abundance or diversity of pollinators (or other invertebrates) are limited to a single study reporting positive and negative effects depending on the pollinator group and geographical location. Therefore, whether anthropogenic EMR (ALAN or AREMR) poses a significant threat to insect pollinators and the benefits they provide to ecosystems and humanity remains to be established.

A new report found that electromagnetic fields emitted by power lines, Wi-Fi, broadcast and cell towers pose a “credible” threat to wildlife, and that 5G (fifth generation cellular technology) could cause greater harm.

The analysis of 97 peer-reviewed studies by the EKLIPSE project concluded that electromagnetic radiation (EMR) is a potential risk to insect and bird orientation and to plant health.

The report concluded that:
The review was conducted by a multidisciplinary, expert steering group composed of four biologists/ecologists who specialized in different taxonomic groups, and two physicists who study electromagnetic fields. This technical report represents the first step in an analysis of currently available knowledge and future research needs.

EKLIPSE (Establishing a European Knowledge and Learning Mechanism to Improve the Policy-Science-Society Interface on Biodiversity and Ecosystem Services) is funded by the European Union to answer requests from policy makers and other societal actors on biodiversity-related issues.

For more information about the EKLIPSE conference held January 22-25, 2018, including slides and video, see: http://www.eklipse-mechanism.eu/emr_conference.

Goudeseune L, Balian E, Ventocilla J (2018). The impacts of artificial Electromagnetic Radiation on wildlife (flora and fauna). Report of the web conference. A report of the EKLIPSE project. http://bit.ly/EKLIPSEconfreport

The EKLIPSE review was conducted at the request of Buglife, the only European organization devoted to the conservation of invertebrates. Invertebrates are vitally important to humans and other life forms which could not survive without them; yet, thousands of species are declining, and many are heading towards extinction.


According to a news story in The Telegraph:

“… the charity Buglife warned that despite good evidence of the harms there was little research ongoing to assess the impact, or apply pollution limits.

The charity said ‘serious impacts on the environment could not be ruled out’ and called for 5G transmitters to be placed away from street lights, which attract insects, or areas where they could harm wildlife.

Matt Shardlow, CEO of Buglife said: ‘We apply limits to all types of pollution to protect the habitability of our environment, but as yet, even in Europe, the safe limits of electromagnetic radiation have not been determined, let alone applied.

There is a credible risk that 5G could impact significantly on wildlife, and that placing transmitters on LED street lamps, which attract nocturnal insects such as moths increases exposure and thereby risk.

Therefore we call for all 5G pilots to include detailed studies of their influence and impacts on wildlife, and for the results of those studies to be made public.’

Buglife called for 5G transmitters to be moved away from street lights where insects are drawn.

As of March, 237 scientists have signed an appeal to the United Nations asking them to take the risks posed by electromagnetic radiation more seriously.”

Dovey D. Radiation from cell phones, Wi-Fi are hurting the birds and the bees; 5G may make it worse. Newsweek. May 19, 2018.