Trends in Brain Tumor Incidence Outside the U.S.

MATERIAL AND METHODS: Data on 4730 malignant glioma patients were obtained from case notifications to the nationwide, population-based Finnish Cancer Registry (FCR), and less detailed data on 3590 patients up to 2016. Age-standardized incidence rates (ASR) and average annual percent changes (APCs) in the incidence rates were calculated by histological subtype and tumor location.

Incidence of glioblastoma increased slightly throughout the study period, while unspecified tumors of the brain showed a decreasing incidence trend.

We also found a slightly increasing incidence trend for the most common histological subtype, glioblastoma, which is consistent with several other studies [1,5,7–9,11,17,18]. A study from United States showed an increasing incidence trend for gliomas in the frontal lobe and decreasing trends for the cerebrum, ventricles and overlapping subtypes [17].

Trends in the incidence of primary brain, central nervous system and intracranial tumors in Israel, 1990-2015

• Exponential growth in cellphone use fueled concerns regarding brain and CNS tumors.
• Results so far are inconsistent. Studying cancer incidence trends may thus be informative.
• We studied brain tumor trends from 1990 to 2015 in Israel, when cellphone use dramatically increased.
• Results do not support a substantial role for cellphone use; smaller risks in special subgroups may exist.
• Future research is needed; implementation of the precautionary principle is prudent.

BACKGROUND: The association between cellphone technology and brain, central nervous system (CNS) and intracranial tumors is unclear. Analysis of trends in incidence of such tumors for periods during which cellphone use increased dramatically may add relevant information. Herein we describe secular trends in the incidence of primary tumors of the brain and CNS from 1990 to 2015 in Israel, a period during which cellphone technology became extremely prevalent in Israel.

METHODS: All cases of primary brain, CNS and intracranial tumors (excluding lymphomas) diagnosed in Israel from 1990 to 2015 were identified in the Israel National Cancer Registry database and categorized by behavior (malignant; benign/uncertain behavior) and histologic type. Annual age-standardized incidence rates by sex and population group (Jews; Arabs) were computed, and the annual percent changes and 95% confidence intervals per category were calculated using Joinpoint software.

RESULTS: Over 26 years (1990-2015) no significant changes in the incidence of malignant brain, CNS and intracranial tumors were observed, except for an increase in malignant glioma incidence in Jewish women up to 2008 and Arab men up to 2001, which levelled off in both subgroups thereafter. The incidence of benign/uncertain behavior brain, CNS and intracranial tumors increased in most population groups up to the mid-2000s, a trend mostly driven by changes in the incidence of meningioma, but either significantly decreased (Jews) or stabilized (Arabs) thereafter.

CONCLUSIONS: Our findings are not consistent with a discernable effect of cellphone use patterns in Israel on incidence trends of brain, CNS and intracranial tumors.

"However, ecologic studies, of which ours is an example, may be insensitive to excess in risk which is restricted to certain groups (for example, heavy users or subjects exposed from very young ages) or to certain tumor types (e.g., tumors that are very rare, that involve specific anatomical sites, or that have unusually long latency periods) [34]. Little et al. [35] also commented that the predicted rates of glioma based on data derived from the small proportion of highly exposed people in the Interphone study, could be consistent with the observed rates in their study [35]. Therefore, although a substantial risk is not very plausible, smaller risks cannot be ruled out and future research should address specific exposure groups, and tumor types and sites, and should allow for longer follow up periods."

England: Brain Cancer Incidence Increased in Temporal and Frontal Lobes of Brain since 1995

A new study of cancer data in England essentially replicated the results of the Philips et al study (see below). The study found that the two age groups most vulnerable to carcinogenic effects from cell phone use -- young and elderly adults -- showed increased incidence over time in brain cancer in the frontal and temporal lobes of the brain -- the two lobes that receive the greatest dose of microwave radiation when cell phones are used near the head during phone calls.

However, Frank de Vocht, the author of this paper, rejected the explanation that cell phone use caused the increased cancer risk. He attributed the increased incidence to better diagnosis of brain tumors, especially in the elderly. Of course, this does not explain why the increase was only observed in the frontal and temporal lobes. He did not rule out the possibility that cell phone radiation may be a contributing factor to the observed increase. 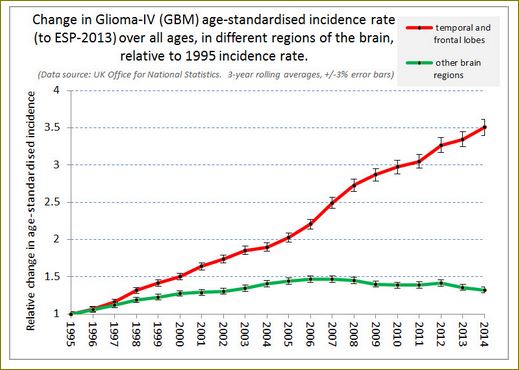 • English 1985–2005 brain cancer subtype rates were compared to counterfactual trends
• Excess GBM increases were found in the frontal and temporal lobes, and cerebellum
• Mobile phone use was unlikely to have been an important putative factor
• No evidence of an effect of mobile phone use on acoustic neuroma and meningioma

This study assesses whether temporal trends in glioblastoma multiforme (GBM) in different brain regions, and of different malignant and benign (including acoustic neuroma and meningioma) subtypes in the temporal lobe, could be associated with mobile phone use.

Increases in excess of the counterfactuals for GBM were found in the temporal (+38% [95% Credible Interval -7%,78%]) and frontal (+36% [-8%,77%]) lobes, which were in agreement with hypothesised temporal and spatial mechanisms of mobile phone usage, and cerebellum (+59% [-0%,120%]). However, effects were primarily present in older age groups, with largest effects in 75+ and 85+ groups, indicating mobile phone use is unlikely to have been an important putative factor. There was no evidence of an effect of mobile phone use on incidence of acoustic neuroma and meningioma.

Although 1985–2014 trends in GBM in the temporal and frontal lobes, and probably cerebellum, seem consistent with mobile phone use as an important putative factor, age-group specific analyses indicate that it is unlikely that this correlation is causal.

Assessment of specific cancer subtypes in the temporal lobe indicated that the excess incidence was mainly found for GBM, with similar trends observed in the frontal lobe and cerebellum....  The increased rates of specific brain cancer subtypes in excess of the counterfactuals correspond to the spatial and temporal patterns that would be expected if exposure to RF from mobile phones were an important putative factor (Cardis et al., 2008, Morgan et al., 2016) ... However, age group-specific analyses indicate that the excess relative impacts increased with age over 65 years and were primarily found in the very old (75/85+ years of age) for whom it is unlikely that mobile phone use had been an important causal factor. In addition, excess numbers of newly diagnosed cases were also observed in the young (<24 years of age) for whom mobile phone use is also an unlikely causal factor....

The assumption that a 10-year lag was the most plausible period between first exposure and when increased risk could be observed in registry data was based on the previous analyses (De Vocht (2016)). Although sensitivity analysis using a 15-year lag showed no evidence of excesses relative to counterfactuals, this may still have been too short....
This study, in agreement with other data from the UK and elsewhere, shows that the incidence of glioblastoma multiforme (astrocytoma grade IV) has increased significantly since the 1980s, especially in the frontal and temporal lobes and cerebellum. However, it further provides evidence that the trend of increasing numbers of newly diagnosed cases of glioblastoma multiforme in the temporal lobe (but likely in the frontal lobe and cerebellum as well) since the mid-1980s, although seemingly consistent with the hypothesis of exposure to radiofrequency radiation from mobile phones being an important putative factor, should to a large extent (if not exclusively) be attributed to another factor or factors; of which improvements in diagnostic techniques, especially in the elderly, seems the most plausible. Although these analyses indicate that it is unlikely that exposure to RF from mobile phones is an important putative factor, they also cannot exclude it as a contributing factor completely. It is therefore important to keep monitoring incidence trend data.

Financial support: No external funding was obtained for this study.


England: Rates of Aggressive Brain Cancer Increased from 1995 to 2014
A newly-published study of brain tumor incidence trends in England from 1995 to 2014 found that the trends over time varied by type of cancer, especially in the frontal and temporal lobes.

The study found “a sustained and highly statistically significant” increase in glioblastoma multiforme (GBM), the most common brain cancer, across all ages. The rate of GBM more than doubled from 2.4 to 5.0 per 100,000 people. However, this increase was mostly hidden because the overall malignant brain tumor trend was relatively flat due to a reduced incidence of lower grade brain tumors.

In England in 1995, when the tumor site was specified at the time of diagnosis, the frontal or temporal lobes of the brain accounted for 41% of malignant brain tumors. By 2015, these two sites accounted for 60% of the tumors.

One cannot know from tumor registry data alone what caused these differential trends in brain cancer. Based upon epidemiologic research, the most compelling explanation for the increased incidence in these deadly brain tumors, especially in the frontal and temporal lobes, may be exposure to microwave radiation due to widespread adoption of cell phones. However, the increased use of CT imaging scans is an alternative, but less compelling, explanation because far fewer people would have been exposed to this form of ionizing radiation.

In the U.S., Zada and his colleagues (2012) obtained similar results in an analysis of national tumor registry data from 1992 to 2006.

Those who cite statistics which appear to show a flat-line trend in overall brain tumor incidence and argue that cell phone use doesn’t cause brain cancer need to examine data on the location and type of brain tumors over time.

Brain Tumor Rates Are Rising in the US: Role of Cellphone & Cordless Phone UseThe Incidence of Meningioma, a Non-Malignant Brain Tumor, is Increasing in the U.S.

Results We report a sustained and highly statistically significant ASR rise in glioblastoma multiforme (GBM) across all ages. The ASR for GBM more than doubled from 2.4 to 5.0, with annual case numbers rising from 983 to 2531. Overall, this rise is mostly hidden in the overall data by a reduced incidence of lower grade tumours.

Conclusions The rise is of importance for clinical resources and brain tumour aetiology. The rise cannot be fully accounted for by promotion of lower–grade tumours, random chance or improvement in diagnostic techniques as it affects specific areas of the brain and only one type of brain tumour. Despite the large variation in case numbers by age, the percentage rise is similar across the age groups which suggests widespread environmental or lifestyle factors may be responsible.

1/. We show a linear, large and highly statistically significant increase in primary GBM tumours over 21 years from 1995–2015, especially in frontal and temporal lobes of the brain. This has aetiological and resource implications.
2/. Although most of the cases are in the group over 54 years of age, the age–standardised AAPC rise is strongly statistically significant in all our three main analysis age groups.

3/. The rise in age–standardised incidence cannot be fully accounted for by improved diagnosis as it affects specific areas of the brain and just one type of brain tumour which is generally fatal. We suggest that widespread environmental or lifestyle factors may be responsible.

4/. Our results highlight an urgent need for funding more research into the initiation and promotion of GBM tumours. This should include the use of CT imaging for diagnosis and also modern lifestyle factors that may affect tumour metabolism. 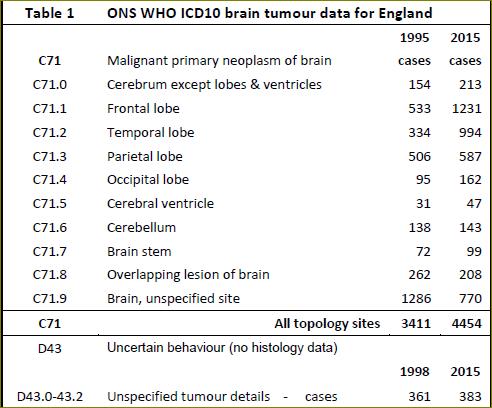 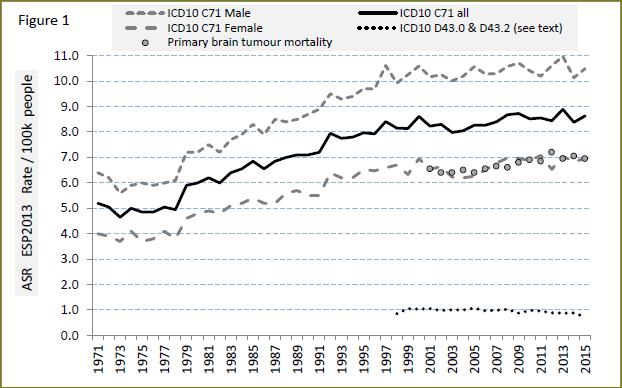