To date more than 100 domestic and 130 foreign news stories have been published regarding the California Department of Public Health's cell phone radiation safety guidance. The safety warnings have received media coverage in 48 countries.

Following are links to the news stories. 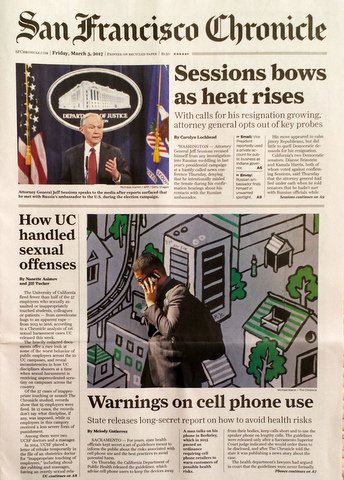 The Dark Side of Wireless Technology

No electronics in the bedroom: Any device closer than arm’s length can cause cancer, infertility, and other health concerns, health officials warn
Russel Davis, Natural News, Jan 4, 2018

Boundaries for the Internet of Things: How to Control Our Connectedness
Daphne Stanford, Cultural Weekly, Jan 3, 2018

How to Decrease Exposure to Your Smartphone's Radiation

20 Odd Facts About the Smartphones in Our Pockets


The Important Reason You Shouldn’t Sleep with Your Phone in the Bed
Brooke Nelson, Reader's Digest, Jan 1, 2018

California to mobile phone owners: use a headset to avoid radiation

Here’s Why You Should Never Sleep Near Your Mobile

California says the only safe way to talk on your cell phone is to text
Zoe Schlanger, Quarz, Dec 22, 2017

How worried do we need to be about cell phone radiation?
Sean Franklin, WBIR (Knoxville, TN), Dec 22, 2017

Avoiding EMF radiation not as easy as quitting smoking

Editorial: What is the risk of using a cellphone?
Mercury News and East Bay Times Editorial Boards, Dec 21, 2017

California is worried about cell phone radiation--should you be too?
Rachel Zoldan, WellandGood, Dec 21, 2017

California Just Issued A Warning About Cell-Phone Radiation—How Worried Should You Be?

California Department of Public Health says your phone might be dangerous

California has issued a warning about the dangers of cell phone radiation — but the science is far from settled
Kevin Loria, Business Insider, Dec 18, 2017

California Just Issued a Health Warning for Cell Phones—But It's Not as Scary as It Seems
Michelle Debczak, Mental Floss, Dec 18, 2017

Is Cellphone Radiation Dangerous? California Released Safety Tips On It For The First Time Ever
Monica Busch, Bustle, Dec 18, 2017

California advises against keeping your phone in your pocket
John Fingas, Engaget, Dec 16, 2017

Keeping your cellphone too close to your body can compromise your health, California officials warn
Najja Parker, Atlanta Journal-Constitution, Dec. 15, 2017

Have a cellphone against your ear? You should consider putting it down
Miami Herald (Miami, FL), Dec 14, 2017