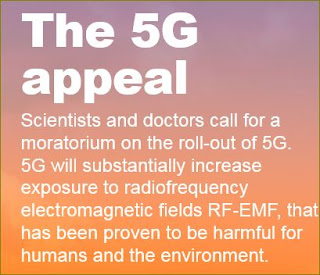 As of today, 415 scientists and doctors from 47 nations have signed The 5G Appeal which calls for a moratorium on the deployment of 5G, the fifth generation of cellular technology.

International Society of Doctors for the Environment Support 5G Moratorium

In April, 2018, the International Society of Doctors for the Environment (ISDE) and its member organizations in 27 countries, adopted a declaration calling for a moratorium on the deployment of 5G (fifth generation cellular technology) in the European Union.

The declaration is entitled, "5G networks in European Countries: appeal for a standstill in the respect of the precautionary principle."

"We believe it should be unethical to ignore the available evidence waiting a possible “a posteriori” demonstration of health damages in the presence of a present and potentially manageable risk for public health.

Thus, in the respect of the precautionary principle and of the WHO principle “health in all policies”, we believe suitable the request of a standstill for the “5G experimentations” throughout Europe until an adequate and active involvement of public institutions operating in the field of environmental health (health ministry, environmental ministry, national environmental and health agencies) will be effectively planned."

In the United States, the ISDE member organization is Physicians for Social Responsibility (PSR).

The official website, www.5gappeal.eu, for the 5G Appeal has been launched. The website contains the text of the Appeal, the current list of signatories, an explanation of 5G, and related news stories.

More than 200 scientists and doctors from 38 nations have signed the declaration calling for a moratorium on the deployment of 5G (fifth generation) cellular technology.

On October 12, the European Commission (EC) issued its response to a September 13 declaration that demands a moratorium on planned 5G expansion, the fifth generation of mobile communication technology. To date, the declaration has been signed by over 180 scientists and doctors from 35 nations.

The Commission's response contradicts the basic assertion of the declaration. The EC claims that current limits on electromagnetic field (EMF) exposure established by the International Commission on Non-Ionizing Radiation Protection (ICNIRP) are adequate to protect the population, and that these limits apply to the frequencies to be deployed for 5G.

Signers of the declaration argue that these limits were designed to protect the population from the effects of heating attributable to brief EMF exposures but were not intended to protect people from chronic exposure to low intensity EMF.

The declaration cites language from the 2015 International EMF Scientist Appeal which has now been signed by more than 230 scientists who have published peer-reviewed research on EMF and biology or health. Prior to the current controversy about 5G, these experts reported “serious concerns” regarding the ubiquitous and increasing exposure to EMF. Their appeal refers to numerous scientific publications which have shown that EMF “affects living organisms at levels well below most international and national guidelines.” These effects include increased cancer risk, neurological disorders, and reproductive harm. The Appeal calls for the strengthening of EMF guidelines and regulatory standards.

In addition, the September declaration cites the International Agency for Research on Cancer's classification of radio frequency radiation as “possibly carcinogenic” in 2011; recommendations of the 2015 Brussels Congress on multiple chemical sensitivity and electromagnetic hypersensitivity; results from the U.S. National Toxicology Program study in 2016 finding cell phone radiation causes DNA damage and cancer in rats; and the Europa EM-EMF 2016 Guideline that long-term EMF exposure is a risk factor for chronic disease and infertility.

The declaration for a 5G moratorium argues that …

“current ICNIRP ‘safety guidelines’ are obsolete. All proofs of harm mentioned above arise although the radiation is below the ICNIRP safety guidelines. Therefore new safety standards are necessary. The reason for the misleading guidelines is that conflict of interest of ICNIRP members due to their relationships with telecommunications or electric companies undermine the impartiality that should govern the regulation of Public Exposure Standards for non-ionizing radiation….”

The EC claims that it “is not aware of any conflicts of interests of members of international bodies such as ICNIRP….”

The EC maintains that “Digital technologies and mobile communication technologies, including high speed internet, will be the backbone of Europe's future economy.”

The EC letter acknowledges that citizens deserve appropriate protection against EMF from wireless devices, and concludes with the following empty promise,

"Please be assured that the Commission will pursue scrutiny of the independent scientific evidence available to ensure the highest health protection of our citizens."

The EC response letter was sent electronically to the authors of the declaration, Professors Rainer Nyberg and Lennart Hardell. The letter was signed by John F. Ryan, the director of public health, country knowledge, crisis management in the EC Directorate—General Health and Food Safety.

(Örebro, Sweden)  Over 180 scientists and doctors from 35 countries sent a declaration to officials of the European Commission today demanding a moratorium on the increase of cell antennas for planned 5G expansion. Concerns over health effects from higher radiation exposure include potential neurological impacts, infertility, and cancer.

“The wireless industry is trying to deploy technology that may have some very real unintended harmful consequences,” explains one of the organizers of the letter, Lennart Hardell, MD, PhD, Associate Professor, Department of Oncology, Faculty of Medicine and Health, Örebro University, Örebro, Sweden. “Scientific studies from years ago along with many new studies are consistently identifying harmful human health impacts when wireless products are tested properly using conditions that reflect actual exposures. With hazards at those exposures, we are very concerned that the added exposure to 5G radiation could result in tragic, irreversible harm.”

5G expansion, which is designed to carry higher loads of data more rapidly through wireless transmission, will require the construction of cell towers every 10-20 houses in urban areas.


In their letter to the European Commission, the scientists write:


“We, the undersigned, more than 180 scientists and doctors from 35 nations, recommend a moratorium on the roll-out of the fifth generation, 5G, for telecommunication until potential hazards for human health and the environment have been fully investigated by scientists independent from industry.”


“Peer-reviewed research has documented industry influence on studies of the health impacts of wireless radiation. We are insisting on a moratorium on 5G until non-industry research can be conducted to ensure the safety of the public.”

Moskowitz is one of the advisors to an earlier effort, the International EMF Scientist Appeal, a petition submitted to the United Nations and World Health Organization in 2015.  The Appeal has now been signed by more than 240 scientists from 42 nations—all have published peer-reviewed research on the biologic or health effects of electromagnetic fields (EMF).

Since the Appeal was published, the world’s largest $25 million study, conducted by the National Toxicology Program in the US, shows statistically significant increases in the incidence of brain and heart cancer in animals exposed to cellphone radiation at levels below international guidelines. This supports human studies on cellphone radiation and brain tumour risk, as demonstrated in many peer-reviewed scientific studies.

The Appeal and this week’s declaration identify health concerns from exposure to radiofrequency radiation including ...

“ … increased cancer risk, cellular stress, increase in harmful free radicals, genetic damages, structural and functional changes of the reproductive system, learning and memory deficits, neurological disorders, and negative impacts on general well-being in humans. Damage goes well beyond the human race, as there is growing evidence of harmful effects to both plant and animal life.”

Roll-out of 5G in the US

In the US, the wireless industry is promoting legislation in at least 20 states to facilitate the roll-out of 5G in addition to sponsoring legislation at the federal level.

In California, city and county governments are opposing SB 649,an industry-sponsored bill which overrides local control over the wireless industry’s access to utility poles and public buildings for 5G deployment. Environmental health advocates fear that exposure to the added radiation from 5G infrastructure will contribute to increased health problems.

“If this bill passes, many people will suffer greatly, and needlessly, as a direct result. This sounds like hyperbole. It is not.” according to Beatrice Golomb, MD, PhD, Professor of Medicine in the medical school at the University of California, San Diego. In her open letter which summarizes the research on the effects of radio frequency radiation, she concludes, ”Let our focus be on safer, wired and well shielded technology – not more wireless.”

The declaration and list of signatories can be found here:
http://bit.ly/5Gappeal170913a

FCC Open Letter: Moratorium on New Commercial Applications of RF Radiation
An Exposé of the FCC: An Agency Captured by the Industries it Regulates
WHO Radiofrequency Radiation Policy