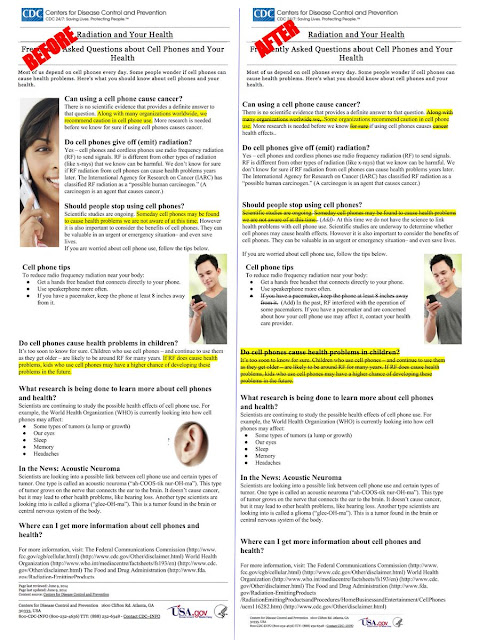 Top Stories in 2015 about Cell Phone and Wireless Radiation

The top two news stories about cell phone and other wireless radiation this year were the International EMF Scientist Appeal and the Berkeley cell phone "right to know" law.

Two hundred seventeen scientists from forty nations have signed the International EMF Scientist Appeal. All have published peer-reviewed research on electromagnetic fields (EMF) and biology or health. The petition calls on the United Nations, the UN member states, and the World Health Organization (WHO) to adopt more protective exposure guidelines for EMF and wireless technology in the face of increasing evidence of health risks. Links to more than 50 news stories published in over two dozen nations can be found on the Appeal web site. For updates on the Appeal see:

The Berkeley (California) City Council adopted a cell phone "right to know" law on a unanimous vote of 9-0 in May of this year.  Berkeley is the first city in the United States to pass a cell phone radiation ordinance since San Francisco disbanded its ordinance after a two-year court battle with the CTIA, the wireless industry's lobbying organization. The CTIA sued Berkeley and the case is currently being adjudicated in the Federal courts. Links to more than one hundred news stories from ten countries can be found on the EMR Safety website. For updates on the law and the ensuing litigation see:


Other Major Stories from 2015

Brain Tumor Rates Are Rising in the US: The Role of Cell Phone & Cordless Phone Use
http://bit.ly/risingtumors

An Exposé of the FCC: An Agency Captured by the Industries it Regulates
http://bit.ly/FCCexposed

Council of Europe: Restrict Wi-Fi and Mobile Phone Use in Schools
http://bit.ly/1XzjDiG