According to a recent CDC survey, for the first time more American households have cell phones than land lines. Meanwhile the evidence keeps accruing that long term cell phone use appears to increase brain cancer risk.

"The nine Bradford Hill viewpoints on association or causation regarding RF radiation and glioma risk seem to be fulfilled in this review.


Based on that we conclude that glioma is caused by RF radiation. Revision of current guidelines for exposure to RF radiation is needed."


Objective. Bradford Hill's viewpoints from 1965 on association or causation were used on glioma risk and use of mobile or cordless phones.


Methods. All nine viewpoints were evaluated based on epidemiology and laboratory studies.


Specificity: increased risk for glioma was in the temporal lobe. Using meningioma cases as comparison group still increased the risk.


Analogy: there is an increased risk in subjects exposed to extremely low-frequency electromagnetic fields.


Conclusion. RF radiation should be regarded as a human carcinogen causing glioma.

Results of epidemiological studies on the association between use of mobile phone and brain cancer are ambiguous, as well as the results of 5 meta-analysis studies published to date. Since the last meta-analysis (2009), new case-control studies have been published, which theoretically could affect the conclusions on this relationship. Therefore, we decided to perform a new meta-analysis. We conducted a systematic review of multiple electronic data bases for relevant publications. The inclusion criteria were: original papers, case-control studies, published till the end of March 2014, measures of association (point estimates as odds ratio and confidence interval of the effect measured), data on individual exposure. Twenty four studies (26 846 cases, 50 013 controls) were included into the meta-analysis. A significantly higher risk of an intracranial tumor (all types) was noted for the period of mobile phone use over 10 years (odds ratio (OR) = 1.324, 95% confidence interval (CI): 1.028-1.704), and for the ipsilateral location (OR = 1.249, 95% CI: 1.022-1.526). The results support the hypothesis that long-term use of mobile phone increases risk of intracranial tumors, especially in the case of ipsilateral exposure. Further studies are needed to confirm this relationship.

The results obtained in the random effects model indicated that there was a significant relationship between mobile phone use for longer than 10 years and the risk of intracranial tumors (OR = 1.46, 95% CI: 1.07–1.98).

Because OR is significantly greater than 1 (OR = 1.25, 95% CI: 1.04–1.52), we can conclude that there is a significant relationship between the time from the first regular use of mobile phone of 10 years or more and the risk of intracranial tumors.

We are not able to compare our results with reference to different kinds of intracranial tumors (glioma, meningioma, acoustic neuroma) in relation to time of using mobile phones. A reliable analysis was not feasible because, in our opinion, the number of original works is too small.

Conclusions
Our results support the hypothesis that long-term (over 10 years) use of mobile phones increases the risk of intracranial tumors, especially in the case of ipsilateral exposure. The same conclusions are valid for the work by Davis et al. (2013) [45], who reviewed papers on the association between the use of wireless (mobile and cordless) phones and intracranial tumors. Those authors stress that the risk of tumors in people who have used the phone for periods longer than 10 years is significantly elevated. In people who had started using the phone on a regular basis before they were 20 years old, the risk of ipsilateral glioma was found to be fourfold higher. Hardell et al. (2013) [46] stress the significance of the “lifetime exposure dose.” For an exposure of ≥ 1640 h, the risk of ipsilateral acoustic neuroma is 2.55 (95% CI: 1.5–4.4).

These results are in concordance with the conclusion of the expert panel for the International Agency for Research on Cancer (IARC), that cell phones are possibly carcinogenic (Group 2B) [47]. More research is needed to confirm that electromagnetic fields emitted by mobile phones are carcinogenic to humans.

Mobile phone use and risk of brain tumors: a systematic review

The results of a review and meta-analysis of the research on cell phone use and brain tumor risk found that long-term or heavy cell phone use was associated with a statistically significant increased risk of brain tumors.

Overall, the study found that long-term or heavy cell phone use was associated with a 33% increased risk of a brain tumor.

Based upon the results of this review, the authors recommend that precautionary measures be taken to reduce the adverse effects of cell phone use.

This paper was published in the peer-reviewed medical journal, Neurological Sciences.

Mobile phones emit electromagnetic radiations that are classified as possibly carcinogenic to humans. Evidence for increased risk for brain tumours accumulated in parallel by epidemiologic investigations remains controversial. This paper aims to investigate whether methodological quality of studies and source of funding can explain the variation in results.

PubMed and Cochrane CENTRAL searches were conducted from 1966 to December 2016, which was supplemented with relevant articles identified in the references. Twenty-two case control studies were included for systematic review.

Meta-analysis of 14 case-control studies showed practically no increase in risk of brain tumour [OR 1.03 (95% CI 0.92-1.14)]. However, for mobile phone use of 10 years or longer (or 1,640 or more hours in lifetime), the overall result of the meta-analysis showed a significant 1.33 times increase in risk. The summary estimate of government funded as well as phone industry funded studies showed 1.07 times increase in odds which was not significant, while mixed funded studies did not show any increase in risk of brain tumour. Meta-regression analysis indicated that the association was significantly associated with methodological study quality (p < 0.019, 95% CI 0.009-0.09). Relationship between source of funding and log OR for each study was not statistically significant (p < 0.32, 95% CI 0.036-0.010).

Data from 14 case control studies were included in the meta-analysis. We identified a total of 30,421 participants (12,426 cases and 19,334 controls). In Fig. 2, the study with quality sum of 8 shows that there is 1.64 times increase in odds of having brain tumour with mobile phone use. In the hierarchical meta-analysis of studies with progressively lower quality scores of 7, 6, and 5, the odds ratio progressively decreased to 1.08, 0.98, and 0.81, respectively. Therefore, the overall result [OR 1.03 (95% CI 0.92–1.14)] shows a statistically insignificant increase in odds of risk of brain tumour.

In Fig. 3, the study with quality sum of eight shows that there is 2.58 times increase in odds of having brain tumour with mobile phone use of more than 10 years duration. In the meta-analysis, studies with progressively lower quality score of 7 and 6 show a progressively lower risk of brain tumour with odds ratio 1.44 and 1.13, respectively. However, the overall result of the meta-analysis shows a significant 1.33 times increase in odds of having risk of brain tumours with mobile phone use.

Stratified meta-analysis according to sources of funding shows a consistent increase in risk of brain tumour with mobile phone use of more than 10 years. While summary estimate of government funded studies shows 1.64 times increase in odds (Supplementary Figure IV), mixed funded studies show 1.05 times increase in odds of risk of brain tumours, but the results were not statistically significant (Supplementary Figure V). The data for more than 10 years of use were not available for phone industry funded studies.

The meta-analysis of case–control studies found that there is a significant positive correlation between study quality and risk of brain tumour associated with use of mobile phones. Higher quality studies show a statistically significant association between mobile phone use and risk of brain tumour, but adding poor quality studies leads to loss of significance. We found that Government funded studies were generally of higher methodological quality than phone industry funded or mixed funded.

However, one qualitatively similar finding in both government funded as well as mixed funded studies is that long-term use (10 or more years or 1640 or more hours of lifetime cellphone use) is associated with increased risk of brain tumour.

In our review of the literature and meta-analysis of case–control studies, we found evidence linking mobile phone use and risk of brain tumours especially in long-term users (greater than 10 years). We also found a significantly positive correlation between study quality and outcome in the form of risk of brain tumour associated with use of mobile phones. Higher quality studies show a statistically significant association between mobile phone use and risk of brain tumour. Even the source of funding was found to affect the quality of results produced by the studies. As mobile phone use certainly continues, our findings are pertinent to warrant application of precautionary measures aimed at reducing its adverse effects. Furthermore, well-designed studies embedded with prospective cohorts are required to provide a higher level of evidence. 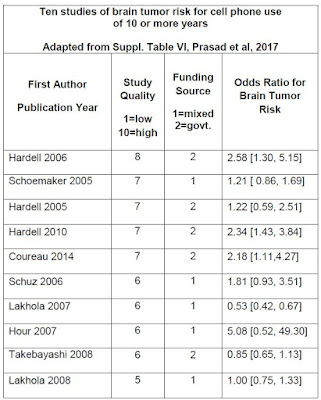 More information about cell phone use and brain tumor risk

Brain Tumor Rates Are Rising in the US: The Role of Cellphone & Cordless Phone UseThe Incidence of Meningioma, a Non-Malignant Brain Tumor, is Increasing in the U.S.Why do many scientists believe mobile phone use increases cancer risk?MOBI-KIDS: Childhood Brain Tumor Risk & Mobile Phone Use Study
Wall Street Journal asks "Should Cellphones Have Warning Labels?"
WHO Monograph on Cancer Risk from Mobile Phone Use Released
Key Cell Phone Radiation Research Studies